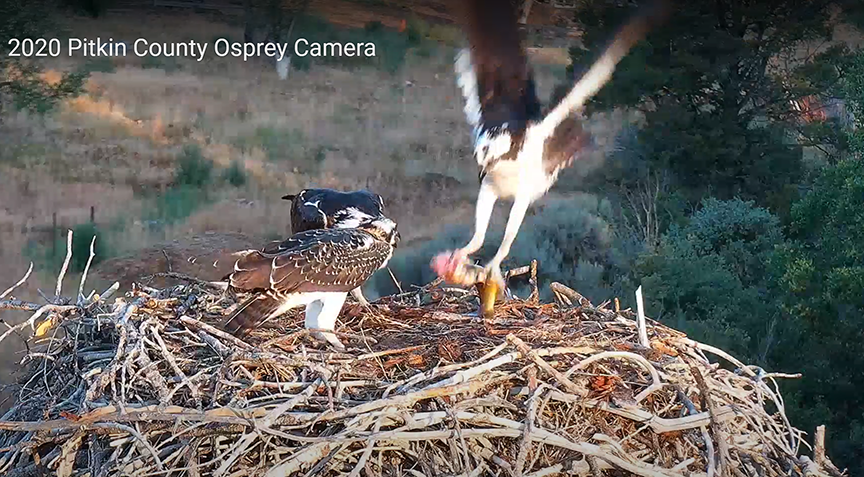 Fish delivery to the Osprey nest at Emma Open Space.

Since Pitkin County Open Space and Trails installed a camera to view the Osprey nest at Emma Open Space (the live feed debuted in 2016), the breeding pair that returns to Emma each year has reared between one and three fledglings in every year but one.

The success rate at the nest correlates to both the number of fish brought to the nest and the consistency in those food deliveries, according to the published results of a 2020 study that included the Emma nest.

Two years ago, Michael Academia, a fisheries biologist and now a graduate teaching assistant at William and Mary (Williamsburg, Va.), launched an effort to gather data about the number and type of fish Ospreys brought to their nests, using nest cameras and citizen scientists to observe and record the data. Academia’s goal was not only to study nest success in relation to the number of fish brought to the nest, but also to establish citizen science and nest cameras as valid and substantial tools for scientific and educational communities.

The Raptor Research Foundation recently published the results of his study in the Journal of Raptor Research, in an article authored by Academia and Harmony Dalgleish.

The Emma nest was one of 19 observed for the study and one of three in Colorado (the other two were in Boulder County). Most were in U.S. coastal areas, along with two in Montana, one in Canada, three in Scandinavia and three in the United Kingdom. Some nests were observed for multiple seasons.

In all, 42 nest seasons were observed (the Emma nest was among those observed for just one season); 74 percent were successful and 26 percent failed. Success was defined as the raising of at least one fledgling (a young bird that is able to take flight).

According to the study results, successful nests saw a higher average number of fish per day brought to the nest for the first 46 days of the season, starting with the first day of incubation. Researchers determined 46 days to be the average time it took for failed nests to fail. The study results also indicated that failed nests experienced significantly higher variation in the number of fish delivered per day compared to successful nests.

The Ospreys at Emma Open Space regularly haul trout to their nest, located on a platform near the Roaring Fork River. The strength of the Roaring Fork fishery apparently deserves some of the credit for the success of the Emma nest.

Ospreys as a species are piscivores, meaning they eat primarily fish, and their fishing skills are unparalled. Initial 2020 observations at Emma determined 3.66 fish per day were delivered on average. Observers concluded 304 fish were delivered during 83 days of observation and trout dominated the Ospreys’ prey. Two hatchlings fledged that year (three fledged in 2021).

Academia’s study concluded that nests that had an average of three or more fish delivered per day were more likely to be successful. That number is, on average, one fish more per day than was observed at failed nests. Low variation in the number of fish delivered daily was also a factor in nest success.

As for citizen science, Academia concluded the potential opportunities and applications presented by nest web cams and citizen scientists have yet to be fully explored. He acknowledged that more highly trained volunteers and more web cameras per site would help in the correct identification of fish species.

For the less scientifically inclined, the Emma Osprey Cam, now in its seventh year of live streaming, simply offers a fascinating glimpse into a world that would otherwise play out right above our heads and yet virtually out of sight. This year, the Osprey pair are raising two chicks, hatched in late May. 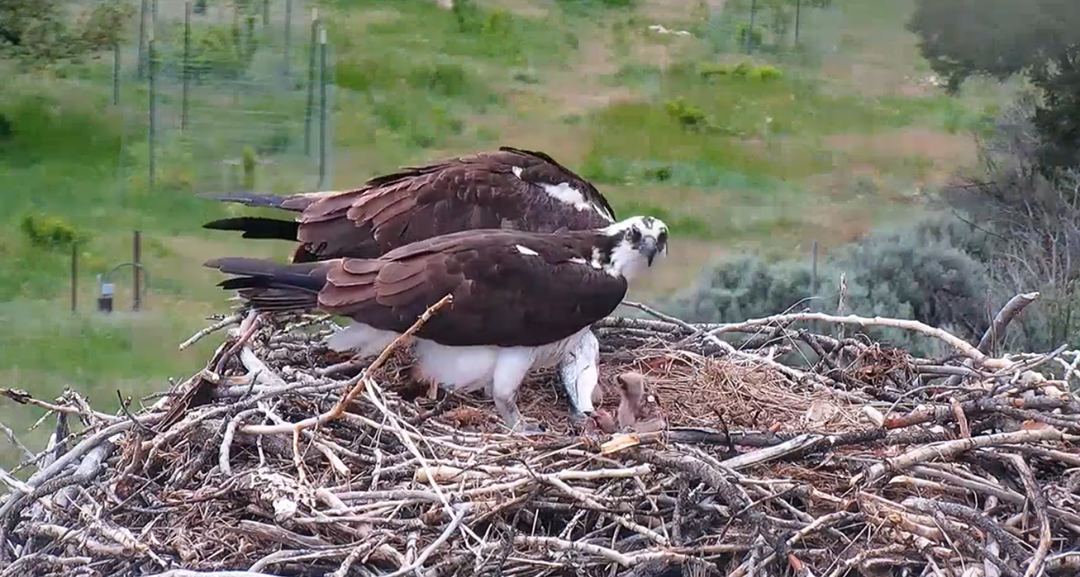 Two tiny hatchlings await a meal from the fresh fish delivered to the nest in May 2022.