Consider planting with pollinators in mind 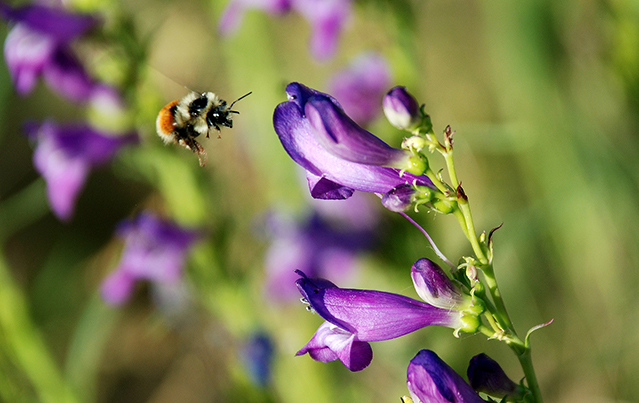 April showers bring May flowers, but that’s not all. Gardeners emerge faster than the dandelions, buying up seed packets, plotting perennial gardens and vegetable patches, and pondering potted plants. Plant nurseries swarm with the green-thumbed set.

If you count yourself among this feverish group, consider this: May presents the perfect opportunity to select flowering plants with more than aesthetic appeal in mind. Think pollinators – a group that includes not only the imperiled honey bee (a European import), but also native bees, moths, butterflies and hummingbirds, among others. Pollinators aren’t just crucial to the human food chain (honey bees pollinate a third of all crops consumed in the U.S.[1]), they ensure the production of berries and seeds that feed a multitude of birds and other animals, not to mention their importance to wildflowers.

Honey bees garner a great deal of attention when it comes to pollination, and deservedly so, but they were introduced from Europe in the 1600s. Meanwhile, there are more than 4,000 species of native bees in the United States, including more than 900 in Colorado, according to the Colorado State University Extension. Many don’t much resemble the honey bee and most are solitary creatures, notes the Extension.

There is no shortage of advice online for planting gardens that are both attractive and important food sources for pollinators of all types (see Key Links below). Not surprisingly, native plants are more likely to attract native pollinators, as they evolved together, but the sight of both native bees and honey bees working over a non-native, ornamental plant isn’t unusual. Bumblebees are among the native, solitary bees that can be found buzzing among the blossoms alongside honey bees.

A pollinator garden should include early season, mid-season and late-season bloomers, the Extension advises. Plant several of each species, as bees only pollinate plants of one species at a time. A short list from the Extension includes blue flax, pasque flowers, nodding onion, flowering fruit trees, penstemons and wallflower early in the season; asters, yarrow, milkweed and flowering trees in mid-season; and Rocky Mountain bee plant, common sunflower, goldenrod and rabbitbrush for late-season blossoms. A shallow water dish outfitted with flat rocks and pebbles in the garden will provide necessary hydration for pollinators. Be sure to change out the water every few days. The stones, at or just above the water’s surface, give the insects something to perch on and prevent accidental drownings.

About 70 percent of native bees nest underground; the rest use hollow stems of plants and tunnels left by other insects, according to the Extension, which also offers advice on providing accommodations for these insects (see Attracting Native Bees to Your Landscape).

Much has been made about dandelions and honey bees. Admonitions abound when it comes to the removal of dandelions from one’s landscape, and with good reason, according to beekeeper Ed Colby, who placed some of his honey bee hives at Emma Open Space last year and plans to do so again this spring.

The off-reviled “weed” plays a key role for pollinators in conjunction with other early season food sources, such as fruit trees, chokecherry and serviceberry. And when a prolonged winter delays other spring blossoms, the hardy dandelion is crucial, according to Colby. If there’s no food left at the hive, honey bees can starve. Dandelions can make the difference, he said.

Colby’s advice echoes that of a slew of pro-bee voices – let dandelions bloom and don’t poison them, which can in turn poison the pollinators that feed on them. Those who would at least prefer to keep their dandelions from spreading should mow or pick them after the blossoms are spent.

Some communities are taking it a step further with a campaign dubbed “No Mow May,” first popularized in the United Kingdom. In 2020, Appleton, Wis. became the first U.S. city to take part, with more than 400 homeowners voluntarily leaving their lawns unchecked for the month of May. Other cities in Wisconsin and in other states have since adopted the initiative and in March 2022, the Appleton Common Council voted to make No Mow May a permanent part of the community’s culture.

Why worry about pollinators?

Pollinators are crucial to the food chain in both the human and animal world, and to plants we all know and love (90 percent of wild plants are dependent on pollination[3]), but many pollinator species are in trouble. Industrial agriculture that concentrates on a single crop does not provide pollinators with season-long sources of pollen and nectar. Indiscriminant use of chemicals to control weeds and pests, climate change and the destruction of natural habitats are also taking a toll.

The Center for Biological Diversity offers a report, “Pollinators in Peril,” laden with sobering statistics: among native bee species in North America and Hawaii with sufficient data to assess, more than half are declining in population. Nearly one in four are imperiled and at increasing risk of extinction.

In September 2021, the U.S. Fish and Wildlife Service announced the American bumblebee, whose populations have plummeted by nearly 90 percent[4], may warrant Endangered Species Act protection. Two other bumblebee species, including the aforementioned rusty patched variety, are already protected by the Act.

Need a better reason to plant for pollinators and leave those dandelions alone? The writers of “Pollinators in Peril” may have said it best:

“Native bees have profoundly shaped the world around us; they are a keystone to many habitats and have inspired our culture, from children’s rhymes about bumblebees to the poetry of Emily Dickinson. Without these tiny, tireless creatures, our world would be a less colorful and interesting place.” 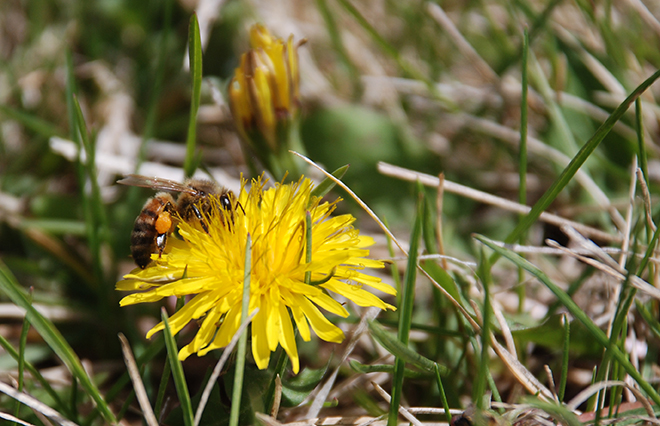 A honey bee works over a spring dandelion, filling the pollen baskets, or corbiculae, on its hind legs (visible as an orange clump).