Have bees, will travel 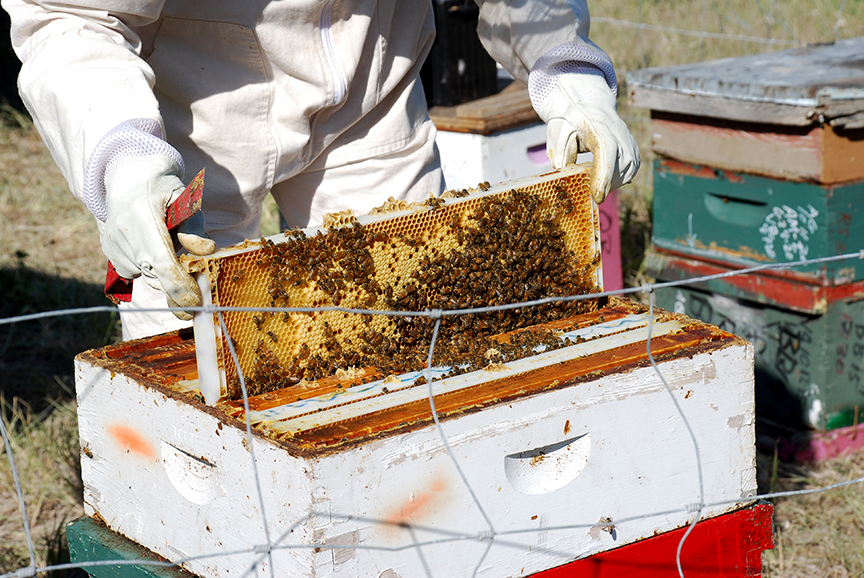 Pulling a frame to check the bees in one hive.

New to the organic farming operation is a partnership with New Castle beekeeper Ed Colby, who agreed to bring some of his hives to the open space at the request of Pitkin County Open Space and Trails. With Two Roots owner Harper Kaufman’s blessing, Colby recently placed six hives in a hay field dotted with alfalfa – a spot far enough removed from the activities of the farm to keep bees from mixing with people, but easily close enough for the bees to do their work. Each hive contains roughly 30,000 bees, including one queen bee.

The hives are surrounded by a battery-powered electric fence – a necessity in bear country.

Honey bees typically range two to three miles from the hive in search of flowering plants, and farther if necessary, according to Colby. They collect nectar and pollen, and in the process, pollinate plants. It’s important work.

Think back to high school science class. The transfer of pollen from the male part of a flower to the female part results in pollination, allowing the flower to produce seeds or fruit. Apples, peaches, squash and beans are just a few of the many products of pollination.

About one-third of all the foods consumed in the United States come from crops pollinated by honey bees, according to the U.S. Food and Drug Administration.

Colby, past president of the Colorado State Beekeepers Association, distributes hives to various sites. The goal is providing the bees’ pollination services while giving the insects access to the plants they need to thrive and produce honey.

He was intrigued by the open space opportunity. “I just thought it would be fun to see what they’ll do here,” Colby said as he carefully unloaded the half-dozen hives into their enclosure. “I’d like to give it a try.”

Vegetable gardens aren’t necessarily a big food source for honey bees, he said, but four days into the experiment, Kaufman said she was noticing what she suspects are the newly introduced bees among her crops.

“I do have a lot of crops that are dependent on pollination – peppers, beans, peas, tomatoes, tomatillos,” she said.

The bees arrived too late to pollinate the assortment of flowering fruit trees in the Emma area, but if they do well, they will have a chance at the trees next spring.

Colby said he’ll be checking on the hives every couple of weeks to keep tabs on the health of the bees. Whether they produce sufficient honey to harvest depends on many factors, including the availability of water, sufficient moisture for the flowering plants they depend on, favorable temperatures, and keeping bee diseases and parasites at bay.

Flowering plants need water to produce nectar, said Colby, which means a honey harvest is not guaranteed. The sugary nectar that bees collect and convert to honey provides the carbohydrates that honey bees require. Pollen is their main source of protein, essential vitamins and such.

“In fact, bee pollination accounts for about $15 billion in added crop value. Honey bees are like flying dollar bills buzzing over U.S. crops,” notes the agency. More than 90 crops depend on bee pollination.