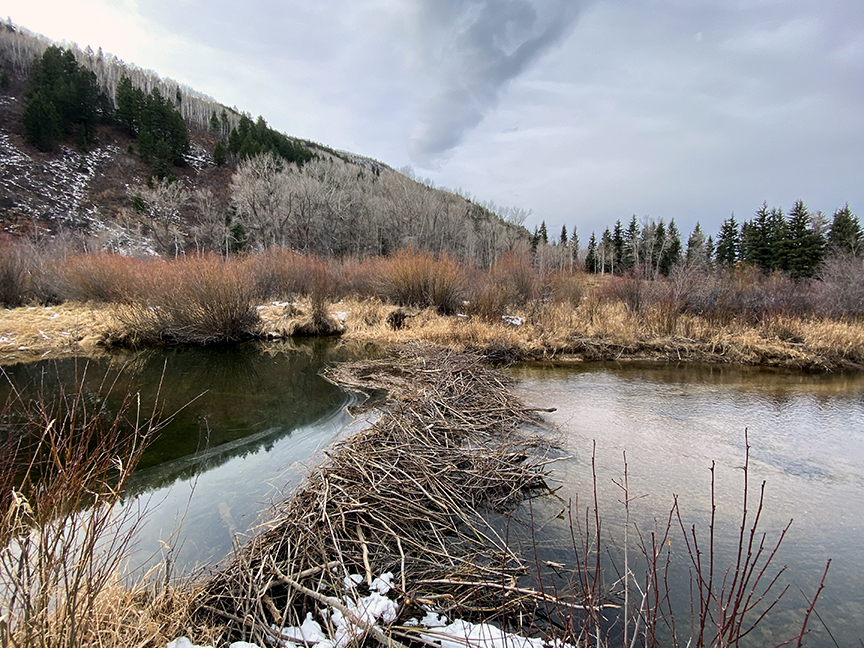 As North Star Nature Preserve moves into its quiet season, leaving Nordic skiers awaiting snow and the river no longer viable to float, the beaver population has been quite busy.

Several substantial beaver dams now impede the slowed flow of the placid Roaring Fork River through the Preserve – evidence that “nature’s engineer” is doing what comes naturally. The beavers can’t help themselves, though their efforts are likely for naught. No dam has yet to survive spring runoff at the Preserve.

Damming a waterway is instinctual activity for a beaver (Castor Canadensis) and low water at North Star late in the year makes conditions perfect for the activity, according to Jonathan Lowsky, wildlife biologist/ecologist with Colorado Wildlife Science in Basalt.

The dams create habitat in the form of wetlands that foster growth of willows – the top food source for the beavers – as well as cottonwoods and aspens, on which they also rely at North Star. Dammed pools also provide a place to construct a lodge that offers protection from predators. Because the dammed water creates habitat for not only plants but other animal species, scientists regard beavers as a keystone species – one that modifies the environment to the benefit of the ecosystem and other species. No mammal other than humans has as great an influence on its surroundings, according to Colorado Parks and Wildlife.

At North Star, however, the annual washing away of the dams in springtime makes the efforts largely ineffectual in the long term. Instinct drives their construction just the same. “There’s no thought to it, they just do it,” Lowsky explained.

Lowsky, along with another wildlife biologist, surveyed the beaver population at North Star in 2018 on behalf of Pitkin County Open Space and Trails. They walked the 2.8 miles of the Roaring Fork River within the Preserve, recording all signs of beaver activity, including lodges, bank tunnels, chewed trees, mudslides and scent mounds. The survey found two active, freestanding surface lodges, one inactive lodge and substantial beaver activity throughout the reach. The lodges are built along the banks of the river, rather than in the middle of a pond, making them less noticeable, Lowsky said.

A typical lodge – a beaver family’s residence – is made of branches, sticks and mud, ventilated at the top and insulated with snow in the wintertime. The lodges increase in size over the years and, unless they are inhabited by a young adult newly on its own, provide a home to an adult pair (they mate for life), yearlings and a litter of two or three kits. The young stay with their parents until they are about two years old.

The dome-shaped lodge typically includes two underwater entrances and a dry, interior platform of piled sticks and mud, cushioned with wood fibers and grass, which sits above the waterline. Beavers curl up together in winter for warmth, though they have waterproof fur and store fat in their tails. A beaver’s tail shrinks over the course of the winter as its body consumes the stored fat, but the busy animals also store a winter’s worth of food beneath the ice. Large caches of cut branches are stored underwater. Beavers do not hibernate; they eat the stored food throughout the winter. In the summer, a beaver’s diet includes grasses and forbs, and the upper, tender branches, leaves and bark of trees.

At North Star, beavers are recognized as an important component of the ecosystem and their lodges and dams are protected. Dams are not to be dismantled or removed, according to the 2020 North Star Nature Preserve Management Plan. While river access through North Star is not permitted during the winter months, both dams and fallen trees may create obstacles for river users in the spring. In that scenario, the management plan calls for Open Space and Trails to provide information on how to negotiate the obstacle, and a section of the river may be closed if necessary. 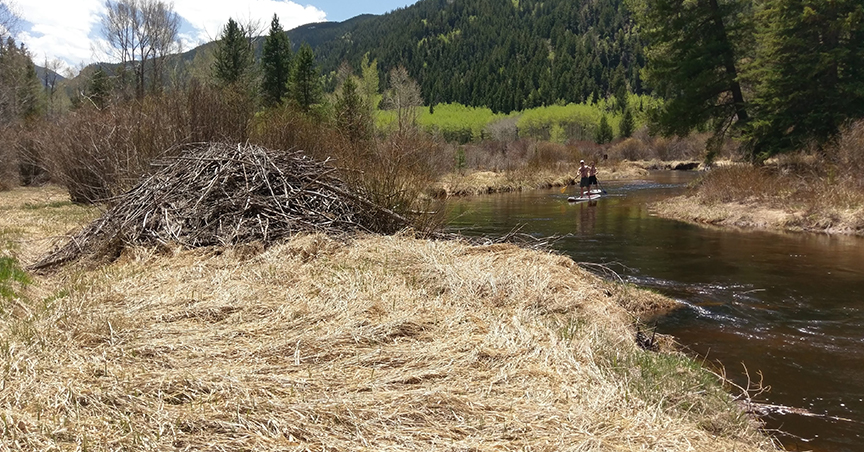 A lodge at North Star