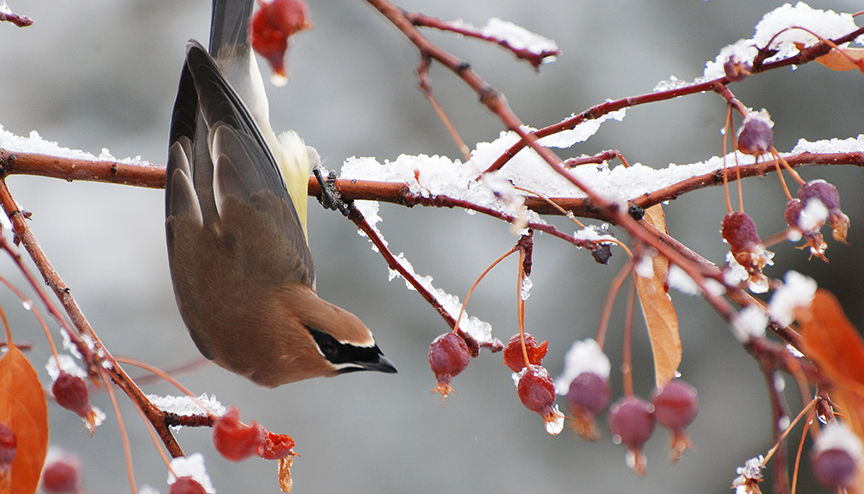 Summer’s songbirds are long gone, making the drab days of winter the perfect time to go birding. How’s that again?

It’s true. The cold and snow usher in a new season of bird-watching opportunities, not to mention the chance to participate in a birding event that has been going on for more than a century.

The National Audubon Society’s Christmas Bird Count is the longest-running citizen science project in the world. Locally, the Aspen Center for Environmental Studies (ACES) organizes birders to take part in the annual count, this year to be held Dec. 19 in Aspen. A count in the lower valley will take place Dec. 18.

“It’s a great way to enjoy winter birding whether you have lots of experience or none,” said Rebecca Weiss, naturalist and the leader of ACES’ birding programs. Groups will cover four routes within a 15-mile circle designated for the Aspen-area count. Even the Snowmass Ski Patrol joins in, she said. Check for registration details.

In addition, area residents are welcome to register backyard birdfeeders that are within the designated circle and tally birds on Dec. 15.

In winter, birds flock to food sources, including birdfeeders, but stocking up on bird seed and suet isn’t the only way to enjoy what the season offers. Open water is also a great bet for memorable bird sightings.

For starters, Colorado sees an impressive influx of bald eagles during the winter months. The new arrivals migrate from elsewhere to find the food sources that lakes, reservoirs and open rivers in the state provide. While the state has a year-round population of the national bird, they’re generally seen in greater numbers along the Roaring Fork, Crystal and Fryingpan rivers during the winter.

Be sure to check what’s on the water, too. Waterfowl species that aren’t present during the summer show up now, and they’re at their colorful best, according to Weiss. And other, year-round residents tend to flock together at this time of year, making them easier to spot. Ducks boast their breeding plumage during the winter, when males are showing off in an effort to bond with females. They’re the stuff of watercolor prints in their winter finery.

Look up to find colorful birds popping out against the muted winter sky. With the foliage gone from deciduous trees and high-elevation birds moving lower in search of food, flocks of red crossbills may even be seen in Aspen, according to Weiss. And the shriveled fruit still clinging in bunches to trees will lure cedar waxwings, a striking bird that is a year-round inhabitant. Evening grosbeaks and pine grosbeaks can’t resist the crabapples, either.

The grosbeaks are a delight at birdfeeders, as well, but head to the Snowmass Ski Area birdfeeders for a glimpse of the brown-capped rosy finch – a “bird nerd” favorite – Weiss advised. These finches spend their summers in rugged, high-elevation habitat but they can appear in flocks of hundreds at high-alpine feeders in winter, according to Weiss.

“If they like your location, you need to have a special budget line to feed the rosy finches,” she said.

Need additional inspiration to give winter birding a try? ACES offers a monthly, Tuesday birding program throughout the winter at its Hallam Lake Nature Preserve. Participants have a chance to explore areas of the Preserve that are otherwise off-limits. Registration is required.