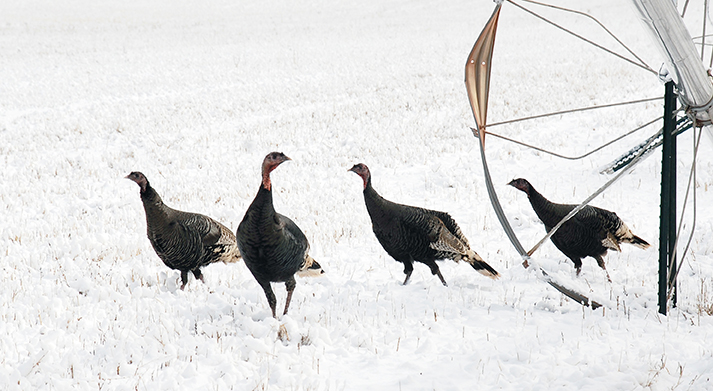 November brings a guaranteed turkey dinner to many a household, but it’s the rare feast that sports a wild Merriam, harvested locally, on a platter.

While wild turkeys abound in the Roaring Fork Valley, these wary game birds can be challenging to hunt despite a rebounding population that speaks to a wildly successful reintroduction effort.

Locally, wild turkeys are all Merriams (a subspecies). Few in number two decades ago, the birds are a now a common sight on Pitkin County’s open spaces and elsewhere in the Roaring Fork and Crystal valleys.

According to Colorado Parks and Wildlife, wild turkeys faced an uncertain future in the early 1900s as a result of poaching and habitat encroachment. Conservation efforts and a successful reintroduction of the birds to Colorado have led to abundant populations of the Rio Grande subspecies on the Eastern Plains and native Merriams in the mountains. Wild turkeys now inhabit most of the state, and most of the U.S. There are now more than 35,000 wild turkeys in Colorado, CPW reported.

The local turkey reintroduction began in the mid-1980s in the area of Thompson Creek Open Space in the Crystal Valley, according to John Groves, CPW district wildlife manager in Carbondale. Birds released in the Basalt area originated from the Air Force Academy near Colorado Springs, according to CPW. The goal was providing a hunting opportunity. The birds flourished. CPW trapped some of the expanding populations and reintroduced them to yet other spots, where turkeys continued to grow in number.

The relocation strategy continues. In 2018, ongoing management of turkeys led CPW to release 19 birds at Deer Creek Open Space in Snowmass Canyon and 20 turkeys on the Hummingbird Lode in the Hunter Creek Valley.

Turkeys are so numerous on ranches in the Crystal Valley that one ranch wife purportedly joked she had to sweep them off her back porch every morning. Rancher Bill Fales considers them a welcome addition.

“I don’t think there’s a downside to it,” he said, unless it’s the toms attacking their own reflections in his glass patio doors. “I don’t mind them. I like listening to them,” Fales said.

Hunting opportunities have expanded along with gobbler numbers.

“At one time, the (hunting) season was like one day long. There were so few, you had one day to maybe get one,” the CPW’s Groves said. “That has changed. There are so many of them, we have extended seasons.”

There are also more licenses available. In 2010, CPW offered 30 licenses for the spring hunt in unit 43, which covers much of Pitkin County. This year, 50 licenses were available for the coveted spring hunt (April 10-May 31), which coincides with breeding season.

Spring is when males (also called toms, or “beards” for the beard of feathers protruding from the base of the neck) fan their tail feathers, gobble and strut about in a showy display to attract hens. Only males may be harvested in the spring. Skilled hunters use calls (a call box uses the friction of wood rubbed on wood to mimic turkey sounds) to lure toms within range by clucking like willing hens or gobbling like a competing tom. Harvest numbers for unit 43 are unavailable, but Groves guessed about 40 percent of hunters were successful.

“They are difficult to hunt,” Groves said. “To get a tom to come into you…they’re pretty wary. It takes an accomplished hunter to pull it off.”

Other units that also overlap Pitkin County have spring turkey licenses available on public and/or private lands. Unlimited over-the-counter licenses are available for a fall hunting season in unit 43, but that is not the favored period as it is outside of mating season, when turkey calls are effective. Both hens and toms may be harvested in the fall.

Further complicating the spring hunt is the migration of turkeys to lower elevations for the winter, where they congregate on private lands on the valley floor. The lower elevations offer more favorable conditions, with less snow and more readily available food. The birds haven’t yet begun to move back to public lands at higher elevations – 8,000 to 9,000 feet, Groves said – when the spring hunt commences. Early spring is also when turkeys often gather on Pitkin County open spaces, where hunting is not permitted.

The hunter who strikes out isn’t alone. According to CPW, nearly 22,408 hunters pursued turkeys in Colorado in the spring of 2021. (The number of turkey hunters in Colorado has increased by 250 percent since 1999.) The 2021 spring harvest estimate, statewide, is between roughly 5,200 and 6,400 birds. 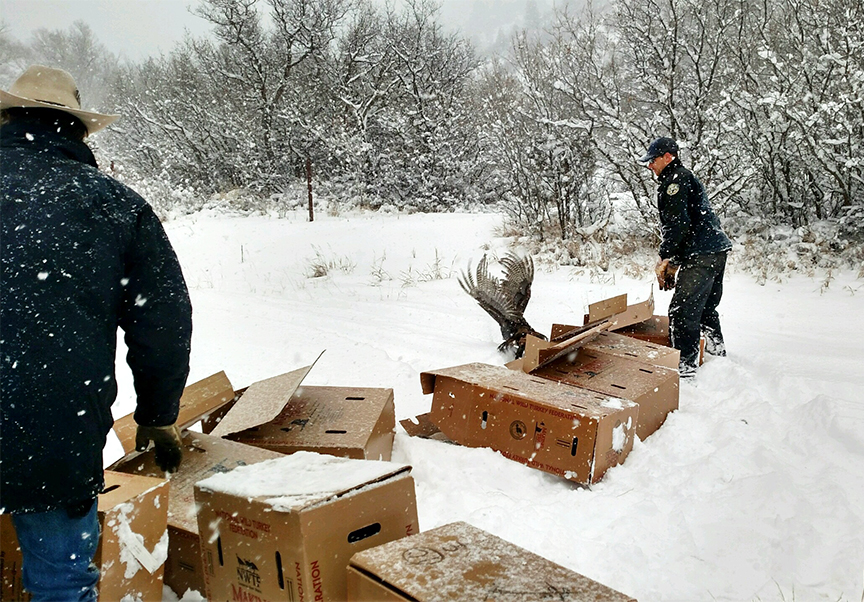 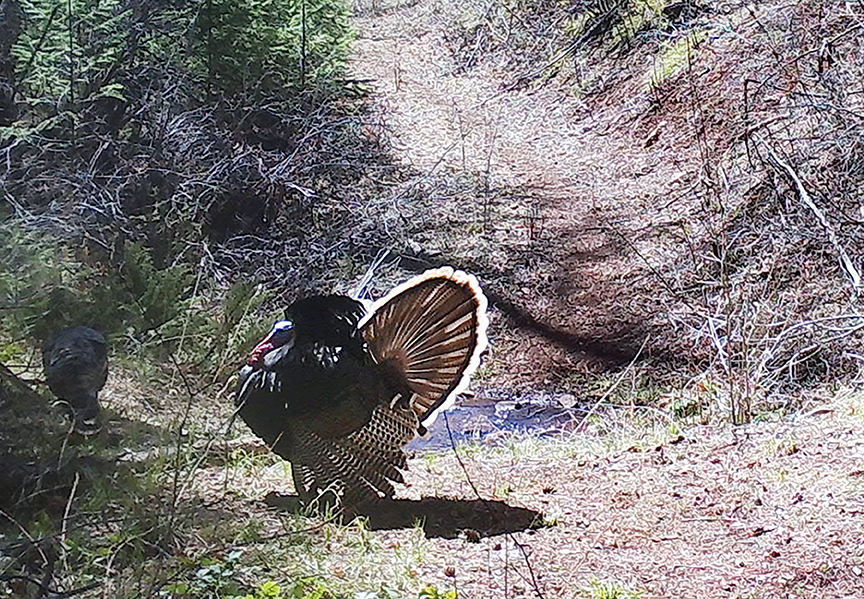 A tom struts his stuff.