Welcoming in the new (water) year from the ground on down 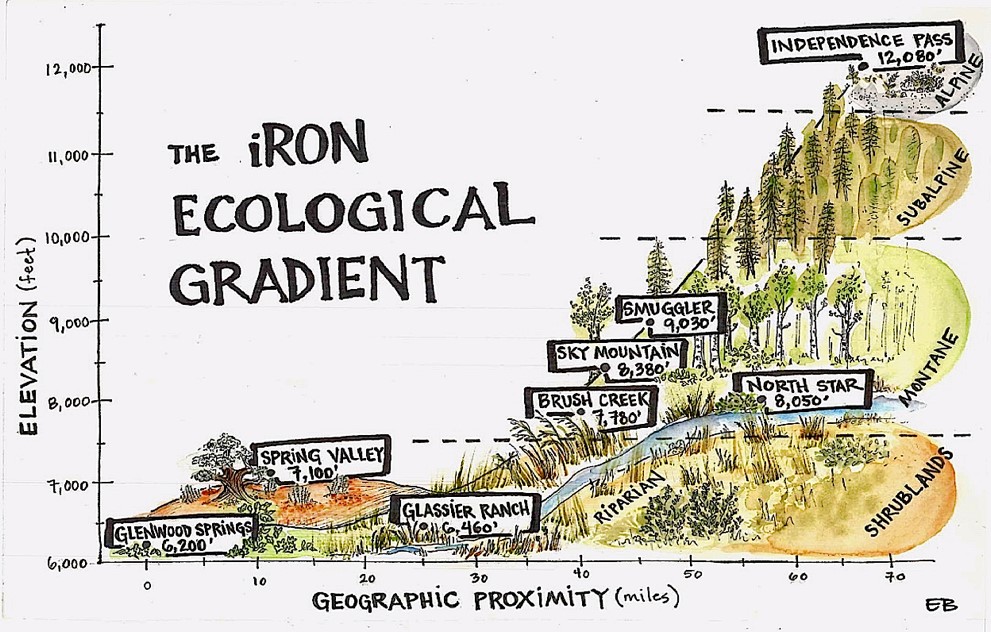 A schematic of the elevations and ecosystem types for the iRON stations. Two stations are located at North Star Nature Preserve, which is why there are only 8 elevation points for the 9 total stations. Image Credit: Ellie Barber.

As the leaves changed last month, the colors welcomed in a new year — a new water year. In order to include even early season snowpack in hydrological planning, a water year differs from a calendar year by running from October through September instead of from January to December. This allows water that fell snow as snow in early winter to be included in the same year as the spring streamflows it drives. Having a water year that begins in October makes sense from a soil perspective as well: this fall’s soil moisture plays an important role in next year’s water supply.

The amount of water held in the soil is called soil moisture, and it is vital in shaping local ecology and fire risk, as well as in determining how much water we receive as runoff during a given year. For this reason, the Aspen Global Change Institute (AGCI) and its partners are studying local soil moisture patterns. The interactive Roaring Fork Observation Network (iRON) collects automated, year-round data on soil moisture, soil temperature and weather from across the watershed. iRON runs from the top of Independence Pass to Red Mountain in Glenwood Springs as a series of 9 stations, 7 of which are located on Pitkin County Open Space land. This long-term research project helps show changes over time, as well as snapshots of current conditions, such as autumn soil moisture readings.

Some sites, like Independent Pass are drier this year than October of 2017 or 2016. Other sites, like Glenwood Springs, have similar October soil moisture across all three years. Variations from year to year go beyond just the total volume of rain received in a season, such as the date at which snow melts and timing of summer or fall rain events. Soil moisture differences across sites are additionally influenced by slope, aspect and soil type.

As AGCI continues to work with our partners across the watershed, we hope to be combine this data with other research in the valley to help answer into broader questions about the ecology and hydrology of our watershed and how these systems may alter in response to climate change. To learn more visit agci.org/iron/about