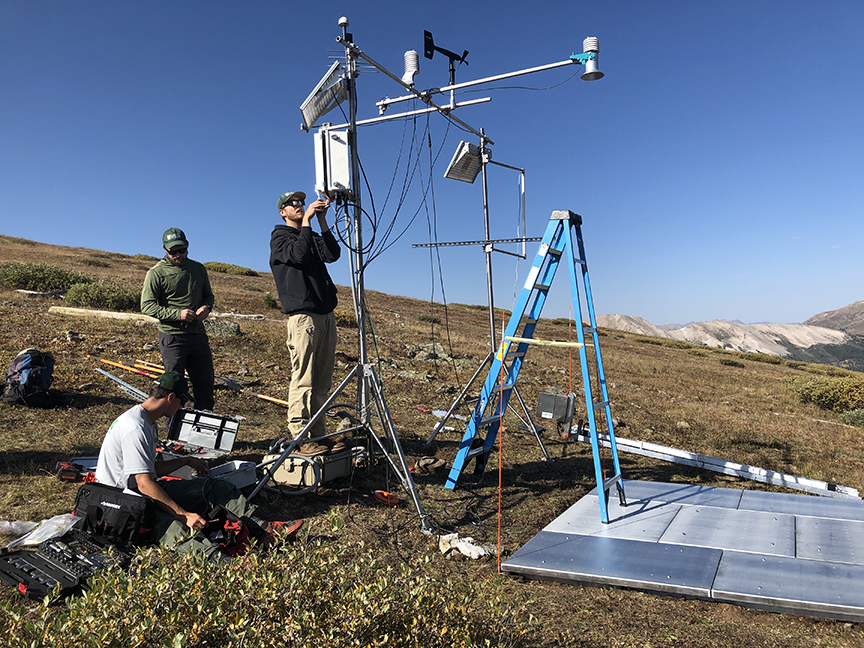 A crew installs one of the next-gen monitoring stations on open space on Independence Pass in September.

Measuring the amount of water contained in Colorado’s largest natural reservoir is not an exact science, but the U.S. Geological Survey intends to help improve estimates. Pitkin County’s open spaces will help.

Because that natural reservoir is the snowpack, the Geological Survey, or USGS, has installed two high-elevation snow stations (a third is planned) and aims to install 18 soil-moisture monitoring stations on county Open Space and Trails properties. They will be part of a broader network of stations in what’s being called the nation’s Next Generation Integrated Water Observing System. The pilot project may be in place for at least a decade.

The Upper Colorado/Gunnison River Basin is the second watershed in the country selected for the next-gen system – one that surpasses existing Snotel sites and the Aspen Global Change Institute’s soil-moisture monitoring stations with its advanced ability to calculate snowpack, the amount of water in the snow and soil, and the available water that will result. The data will offer a clearer understanding about how the snowpack varies across the landscape and provide on-the-ground information to dovetail with advances in aerial snowpack monitoring.

With the backdrop of a 23-year drought in the Colorado River Basin and this fall’s federal order to reduce water use in three lower-basin states, counting every drop of water in the reservoir that is Colorado’s snowpack has never been more important. The next-gen system is intended to fill in the gaps in water forecasting.

“We’re in a lucky position, in the headwaters, to be able to help collect information on the snow that becomes our water,” said Liza Mitchell, Open Space and Trails’ natural resource planner and ecologist, in a presentation to the Open Space Board and Board of County Commissioners in September. Both boards endorsed the initiative.

The county’s distribution of available land made the open spaces ideal for the USGS project.

A USGS team quickly assembled a snow station at 12,198 feet of elevation on Independence Pass. The site is the OST-owned Orphant Boy mining claim, where an Aspen Global Change Institute (AGCI) soil-moisture monitor is already in place. A second station was installed high in the Hunter Creek drainage and a third is planned in the upper Fryingpan Valley – also on mining claims owned by OST. Other stations are planned outside of Pitkin County.

This month, the first soil-moisture monitors are scheduled to be installed; eventually, a network of up to 25 stations is planned, including 18 on open space properties. The new monitors will use a newer technology that can complement and validate the existing Aspen Global Change Institute stations located at various open spaces in the upper Roaring Fork River Valley. Others are planned in the Fryingpan and Crystal River drainages.

The new soil monitors will employ cosmic ray neutron sensors to measure moisture over a broader area than what can be accomplished by the single-point AGCI monitors, which measure moisture at three different depths through the placement of probes. The AGCI data is specific to the location of the probes.

For these, the USGS has sought out high-altitude, exposed sites. In contrast, Snotel sites, operated by the U.S. Natural Resources Conservation Service, tend to be slightly lower in elevation, and located in openings sheltered by forest, noted Graham Sextone, a research hydrologist with the Colorado Water Science Center who is working on the USGS next-gen system. The Snotel site on Independence Pass, for example, is at 10,958 feet in elevation – about 1,200 feet lower than the newly installed next-gen station.

“Snow is really a key variable that drives the hydrology in the upper Colorado River Basin. That’s really our biggest water reservoir,” Sextone said. “Better characterization of that snowpack and soil water storage is really key for improving our understanding of our water availability in the basin.”

The newly placed station on Independence Pass was already showing different metrics within the snowpack than its Snotel counterpart during last week’s snows. On the morning of Oct. 27, both stations measured about 10 inches of snow, a big jump thanks to an overnight storm. The Snotel site calculated the snow water equivalent at 1.2 inches. At the higher USGS next-gen site, the snow water equivalent was .72 inches.

The new snow stations will measure snowpack and snow water equivalent, as do their Snotel counterparts, but will also measure characteristics like blowing snow, radiation and snow density. In all, 18 different weather, snowpack and other metrics will be measured. Radiometers at the sites will measure “snow albedo,” or snow whiteness – the proportion of light reflected from the snow’s surface. This will get to the effect of dust on snow – a factor that accelerates the melting of snow and can significantly impact timing of spring runoff and water availability.

Sextone hopes the stations also give the USGS a better understanding of sublimation in high-alpine environments. According to the USGS, sublimation occurs when the air is so dry that when it hits the snowpack, the frozen water evaporates, going directly from ice to vapor and bypassing the liquid phase entirely. Sublimation is a difficult piece of the water cycle to quantify, but of great interest to scientists and water resource managers alike. It’s a common way for snow (water) to disappear in the arid West.

As an example, Sextone offered previous data from a site near Red Mountain Pass in southwest Colorado, where a next-gen snow station is located at about 12,000 feet. A nearby Snotel site is about 1,000 feet lower. The higher site showed snow accumulations representing a much higher snow water equivalent to start the winter, then significant losses as a result of sublimation over the winter that were not picked up by the lower-elevation Snotel site. The snow water equivalent at the next-gen site did not surpass that of the Snotel site again until snow melted out at the lower site, while the higher next-gen site continued to hold snow.

“That elevation difference can pick up some really important differences,” he said. “We haven’t been able to understand sublimation from those (Snotel) sites.”

The USGS sites transmit real-time data hourly that is available to the general public. The Independence Pass and Hunter Creek sites are up and running (see the links below).

The USGS isn’t the only agency that will delve into the data. The AGCI, Independence Pass Foundation and Colorado River District have all expressed interest, according to OST’s Mitchell. Local recreationists, too, will likely be checking to see what the snow has in store.

USGS presentation to Open Space Board and County Commissioners