When it's time to leave Burnt Mountain alone 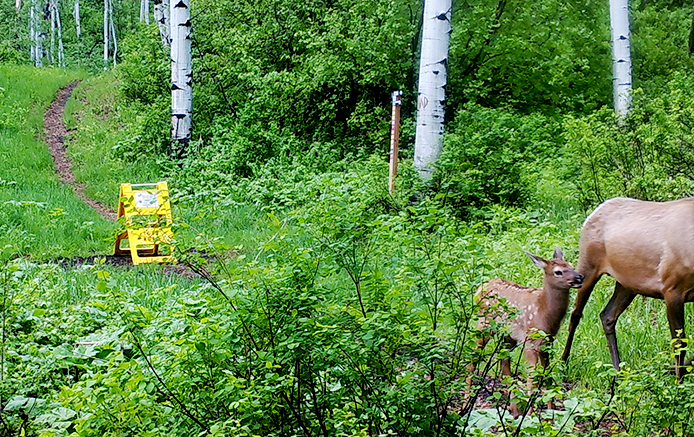 Burnt Mountain in springtime is a special place. It’s so special, you can’t go there.

The area stretching between West Buttermilk and the Two Creeks side of Snowmass Ski Area is one of only seven spots in the roughly 2.2 million-acre White River National Forest where human access is off-limits for just one critical reason – elk calving.

Elk return to this expanse of aspen-conifer forest each year to find the water, lush forage, sunshine and seclusion they need to survive, give birth and nurse their young without being startled and disrupted. Here, where the Snowmass Village town boundaries and Forest Service lands overlap, there are a lot of “eyes” keeping tabs on the wildlife and intruders. Multiple wildlife cameras are in place.

New this year, ropes will close off some areas along with the usual signs. Entrances from the ski area, where the slopes will be open through April 25 this year, will be well marked with closure signs, and Snowmass Village trail rangers will be keeping an eye on the points of entry.

“The closure has been in place so long that even neighbors are paying attention,” said Tina White, trail ranger with the town’s police department. “The community is paying attention to people who are going in.”

Word gets around quickly when a citation is issued, White added. Still, the cameras document people violating the closure each year – 13 people and 7 dogs were photographed last spring.

“It’s disheartening that people are willing to disrespect the closure and the purpose of the closure,” White said. “There’s so many other places that they could go.”

The annual trail closures begin April 25 with the Tom Blake Trail, Sequel Trail and other trails in the Elk Camp/Two Creeks vicinity closing to use through June 20. Anaerobic Nightmare and the lands surrounding it are closed April 25 through June 27. The closure of the Government Trail and Sugarbowl area was extended by a week starting last year; the closure begins May 15 and continues through June 27 (see map below).

The added week of the closure on the Government Trail and Sugarbowl area came at the suggestion of Colorado Parks and Wildlife, which is in the midst of a 6-year study of elk calf survival rates and is also studying the impact of recreation on elk. Pitkin County Open Space and Trails helped fund the first two years of the calf study. It’s possible the study results will lead to a recommendation to further adjust the closure dates. CPW has produced a video, Emblems of the West, about Colorado’s elk and the calf study.

While the closures are specifically for the protection of elk during the calving season, other species appear to benefit. Wildlife cameras document not only cow elk and their calves, but moose, mule deer and bears. The routine sightings of moose calves are a “happy coincidence,” said Phil Nyland, wildlife biologist in the Forest Service’s Aspen-Sopris Ranger District. “Other wildlife are provided the same solitude – free from human presence and from dogs.”

Disturbances caused by humans and dogs is stressful to elk giving birth and nursing their calves. Newborn elk are not terribly mobile and cows can flush easily. A cow startled into fleeing leaves a calf that can’t keep up, according to Nyland. Injury and abandonment are possibilites.

By the time the closures are lifted in June, calves are able to stay with the herd as the animals move up to the ridge of Burnt Mountain and into the higher elevations of the Maroon Bells-Snowmass Wilderness Area where they spend the summer, Nyland said.

Violating the Burnt Mountain closures can result in a fine of up to $5,000 or 6 months in jail, punishable by Forest Service regulation. Violation of a Town of Snowmass Village ordinance also applies within town limits.

There are other options for recreation in the vicinity of Snowmass Village. Among them, Highline, Viewline and South Rim trails are open year-round. Sky Mountain Park, including Seven Star Trail and the North Rim Trail, all open May 16. 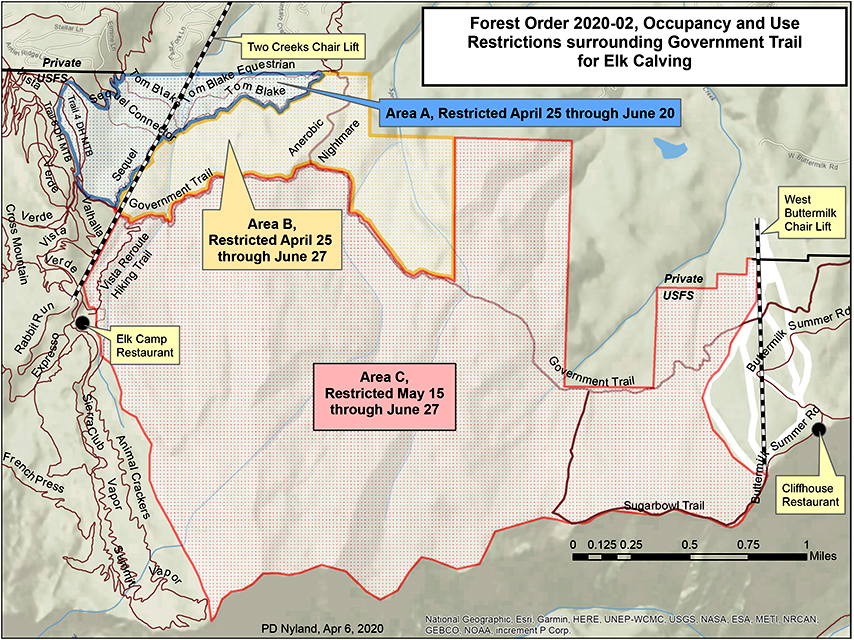