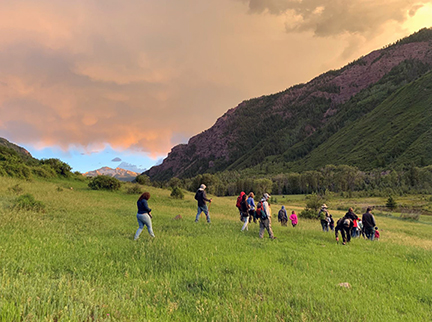 An evening exploration at Filoha Meadows.

Pitkin County’s two nature preserves are largely off-limits to the general public, but each summer and fall, a limited slate of programs offer rare access to these special places. And now is the time to sign up.

At North Star, Open Space and Trails sponsors programs led by both the Aspen Center for Environmental Studies and Roaring Fork Conservancy. At Filoha Meadows, the Conservancy leads a series of evening walks and daytime explorations. Participation in all of the programs is capped, registration is required and spots are snapped up quickly.

June brings four North Star floats led by the Conservancy. The fee is $10 per person (all other programs are free) and participants enjoy a logistical advantage that is hard to beat – the convenience of shuttle transport to and from the river for participants plus the provision of all the necessary equipment, including inflatable kayaks, (a.k.a. duckies). Participants are treated to a pre-float, ecological overview of the area by a Conservancy educator – lessons that quickly come to life during the serene, evening float down the placid stretch of the Roaring Fork River. Wildlife sightings may include trout, deer, moose, beaver and the plethora of bird life at North Star.

“The volume of birds feeding on whatever is hatching is so awesome, as it happens right in front of every ducky,” said Christina Medved, the Conservancy’s director of community outreach.

Birding and other delights

On shore, the Aspen Center for Environmental Studies (ACES) will offer four birding sessions at North Star, starting June 25 and concluding Sept. 9. Participants are regularly treated to a variety of bird sightings and access to areas of the Preserve that are otherwise inaccessible.

Incidentally, this year ACES will add new birding programs on other open spaces in August and September, when flocks of songbirds migrate through the area. The Fall Bird Migration series will highlight the diverse bird activity at a variety of open spaces, including Jaffee Park. Registration opens Aug. 1 at aspennature.org.

Late summer and fall also brings ACES’ Walk on the Other Side and Evening of the Elk programs at North Star, again allowing participants to experience areas where few people are allowed to tread – the permanently closed area west of the river. The visits are timed to avoid critical times for wildlife, but signs of wildlife nonetheless abound.

“There is a feeling of being in on a secret when I go to the other side of North Star with a small group,” said Jim Kravitz, director of naturalist programs at ACES and guide on the Other Side tours. “This is a place that is rarely visited by humans. Rather than dominating nature, conquering trails or a peak, we take the role of humble guest.”

Kravitz called the walks a highlight of his summers, as attendees come to understand the importance of North Star as vital wildlife habitat.

Similarly, guests in the Evening of the Elk programs head for the vast meadow on North Star’s west side to listen as bull elks bugle at dusk and herds sometimes emerge from the trees in the waning light.

Twilight fades to darkness at Filoha Meadows, where participants in the Roaring Fork Conservancy’s Evening Exploration program are treated to up-close inspection of the unique orchid varieties found in the Filoha bogs and then, dancing fireflies and swooping bats.

Many visitors – children and adults – see fireflies for the first time in their lives at Filoha. Participants have come from around Colorado just to see and photograph the tiny orchids, according to Medved, but children are most captivated by the lightning bugs. Managing to capture one in cupped hands is a memorable experience.

July is the time to see fireflies and orchids. In August, programming at Filoha transitions to daytime nature explorations along the meandering Crystal River and in the waving, tawny grasses of Filoha’s meadows, with one last program on Sept. 28 – an afternoon walk before Filoha closes for the season on Nov. 1.

Sign up for ACES’ North Star programs as registration opens at www.aspennature.org/activities