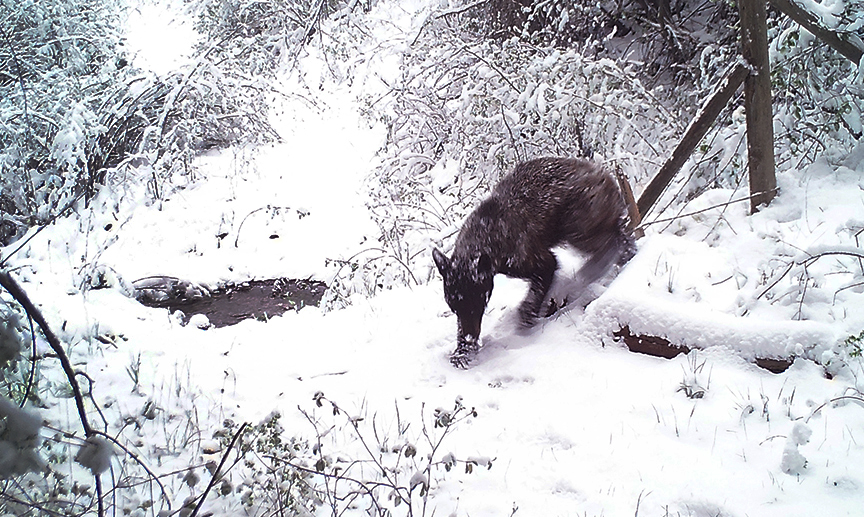 April is nearly upon us. The birds are chirping and the bears are stirring. The lengthening days and ever-so-slightly warmer temperatures don’t just cheer winter-weary humans. The natural world is ready to spring forth, too.

Pitkin County Open Space and Trails typically spots the first black bears (Ursus americanus) of the season on its wildlife cameras in April, though bears start emerging in mid-March, according to Colorado Parks and Wildlife. A family of black bears emerged March 5 on the Rio Grande Trail and will no doubt reappear before long. Black, incidentally, is a species, not a color. Black bears can range from blonde to cinnamon or brown, to black. More than 90 percent of a black bear’s natural diet is grasses, berries, fruits, nuts and plants, says CPW. The rest is primarily insects and scavenged carcasses.

Given a bear’s natural diet and the paucity of available forage in early spring, it’s important for humans to be careful about not attracting bears. One way to avoid inadvertently feeding bears is to stop feeding the birds.

In 2019, CPW documented 5,369 bear reports between April 1 and Dec. 31, but the agency suspects there were likely an equal number of human-bear interactions that went unreported. Of the reported interactions, 1,728 involved trash and another 397 involved bird feeders.

Bird feeders should not be placed outside from March through the end of November for any reason, advises CPW. Letting bird feeders turn into bear feeders teaches bears that it’s safe to come close to people and homes in their search for food. That can be a deadly lesson for a bear.

Attracting birds to the backyard, on the other hand, allows for a rewarding interaction with nature. Consider placing a nesting box out, creating a “bird garden” or hanging flower pots. Brightly colored, trumpet-shaped flowers attract hummingbirds, butterflies and a variety of beneficial insects. Sparrows and finches feed on the seeds of various perennials and grasses. And bird baths – particularly ones that employ running/moving water – will attract a wider variety of birds year-round than a bird feeder, according to CPW. Just keep the water source small. Bears are attracted to large ponds, pools and uncovered hot tubs.

For bird watchers, April brings the familiar trill of the red-winged blackbird (though some spend the winter in the valley). Other early spring arrivals include the mountain bluebird and yellow-rumped warbler (usually the earliest arriving warbler), ospreys and killdeer. And, birding is an ideal solo pursuit for purposes of social distancing.

Find out more about bird baths HERE from the Cornell Lab of Ornithology.

Meanwhile, Colorado Parks and Wildlife offers a plethora of information on living with bears. Click HERE.