While elk and mule deer gather on the parcel and black bears have been spotted taking a dip in the irrigation ponds, it’s the property’s location at the mouth of Arbaney Gulch – a topographical pinch point between large tracts of federal public lands to the northeast and the Roaring Fork River on the southeast – that make it a crucial corridor for wildlife movement.

Since that time, Open Space and Trails has closely monitored wildlife – not on the open space itself, but in the lower reaches of adjacent Arbaney Gulch, within the national forest. A motion-triggered camera placed in the gulch, at a wildlife watering hole on tiny Deer Creek, has confirmed the property’s importance as a protective buffer to an area abounding in wildlife. The quantity and diversity of species documented over time verifies Deer Creek Open Space as a key contributor to wildlife protection and habitat conservation.

Colorado Parks and Wildlife has mapped the open space and immediate vicinity as a black bear concentration area, bald eagle winter range and wild turkey overall range, as well as a Severe Winter Range and Winter Concentration Area for both mule deer and elk. The area is also identified by CPW as a mule deer migration corridor and elk calving area.

A 2018 field survey of the area by consulting wildlife biologists found habitat in some of the mapped elk calving area that is consistent with other areas in the region that are used by elk to bear their young. This potential production area is not on Deer Creek Open Space, but on public lands that could be accessed via the property, and so are being considered as part of a holistic approach to management of the open space as Open Space and Trails prepares a full management plan for the property.

The management plan contemplates the continued closure of the property at the mouth of Arbaney Gulch to the public in order to reduce human intrusion into the habitat that lies beyond the border of the open space.

Five years of wildlife camera data confirms the importance of Arbaney Gulch to the movement of wild animals coming down the ravine and heading toward the open space, and coming up from the open space into the national forest, following an old two-track road on the open space that narrows to a trail in the gulch. Oftentimes, animals stop for a drink at Deer Creek, or come down the gulch only as far as the watering hole. A fence post within the camera’s view has proven to be a popular scratching post for bears.

The camera has documented multiple bears, including sows with cubs; one or more lions including a lion with a cub; elk cows and bulls; mule deer; wild turkeys and their young; foxes and coyotes; and smaller critters such as pine squirrels, a short-tailed weasel, skunks, rabbits and possibly a marten. Animals are seen both day and night, and wildlife activity occurs year-round. This is not the case elsewhere on open spaces that also see heavy human use.

Arbaney Gulch proved so rich with wildlife activity that Open Space and Trails temporarily installed a video camera there, in addition to the camera taking still photos – a first for the program’s wildlife monitoring efforts. What follows is a sampling of the wildlife images captured there. 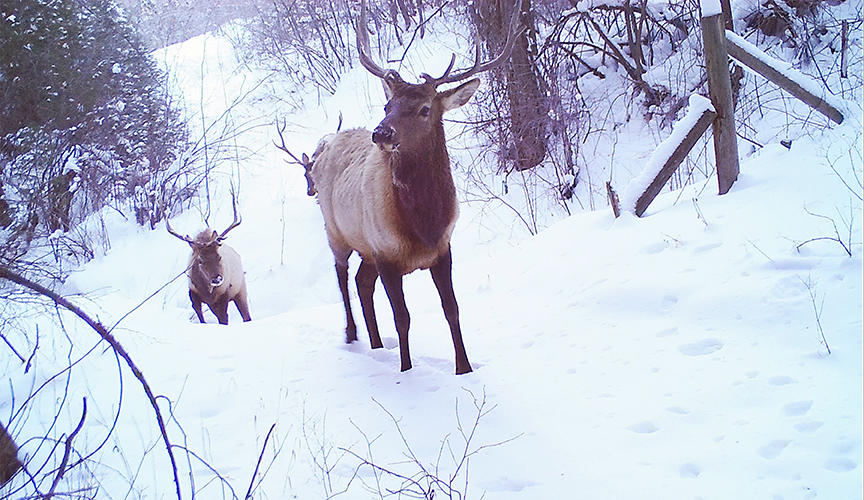 A trio of bull elk in Arbaney Gulch 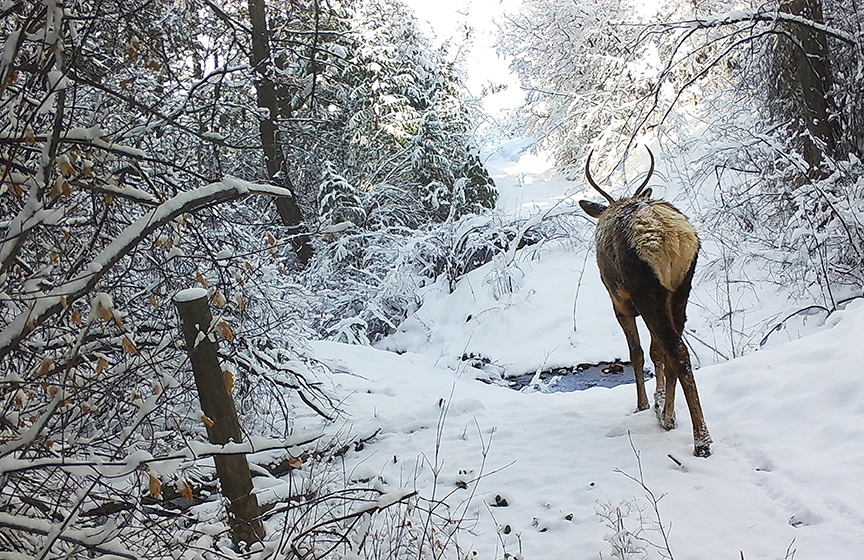 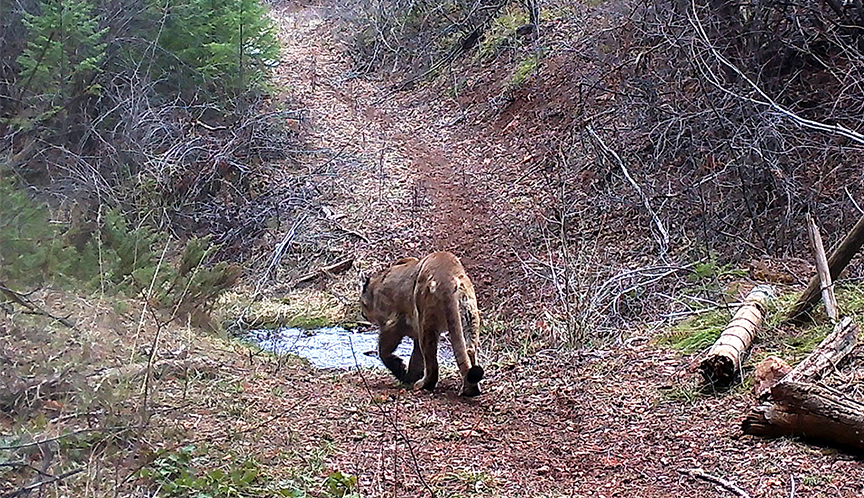 A mountian lion heads to water. 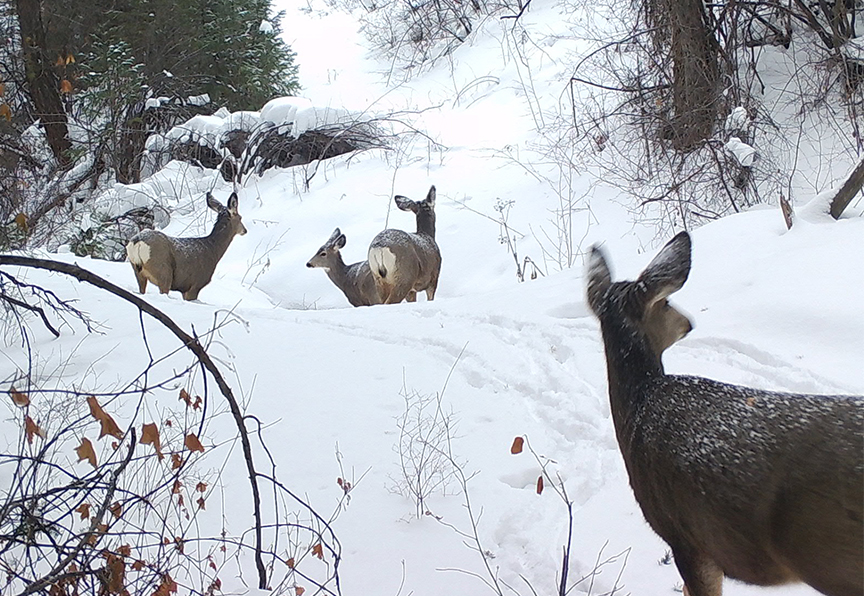 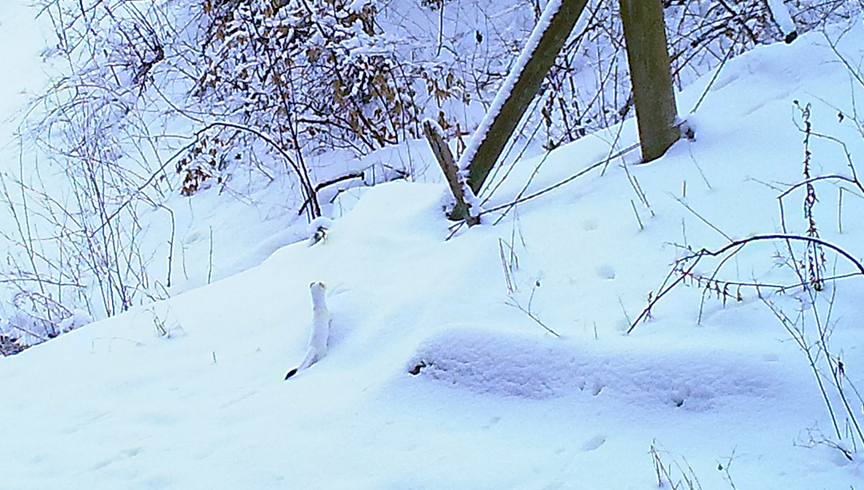 A short-tailed weasel pops into view 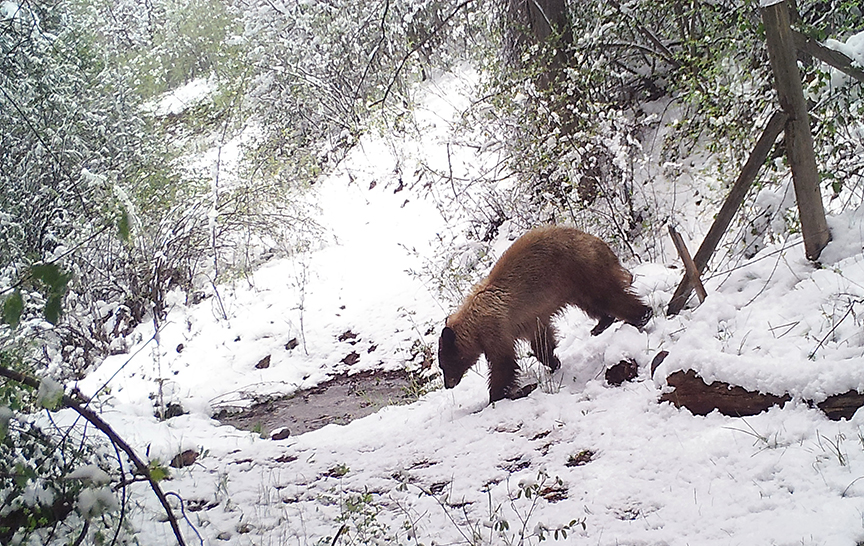 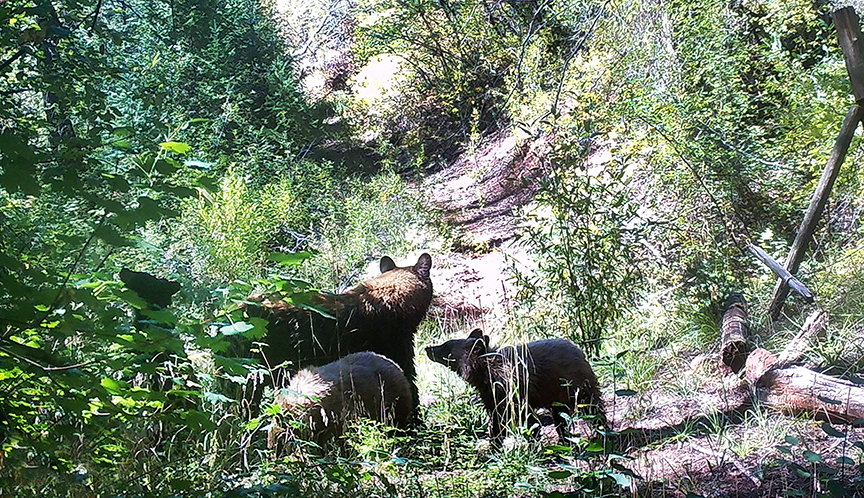 A sow and three cubs

A black bear with her cub 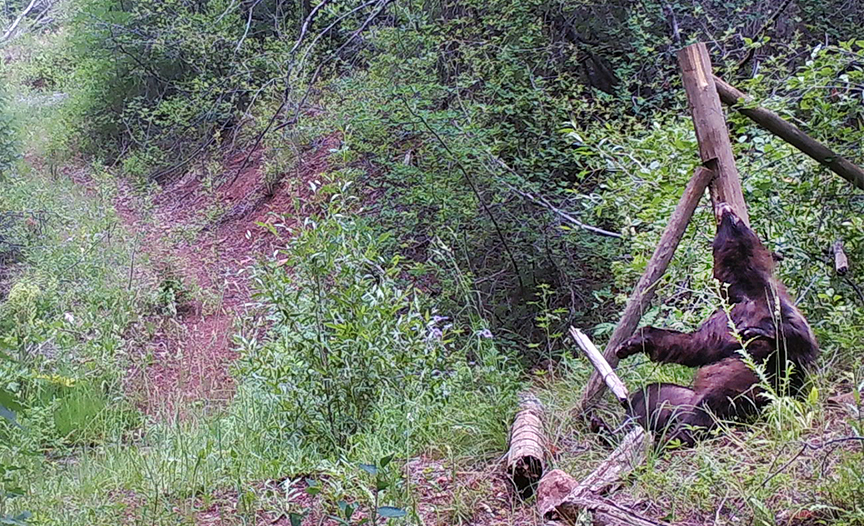 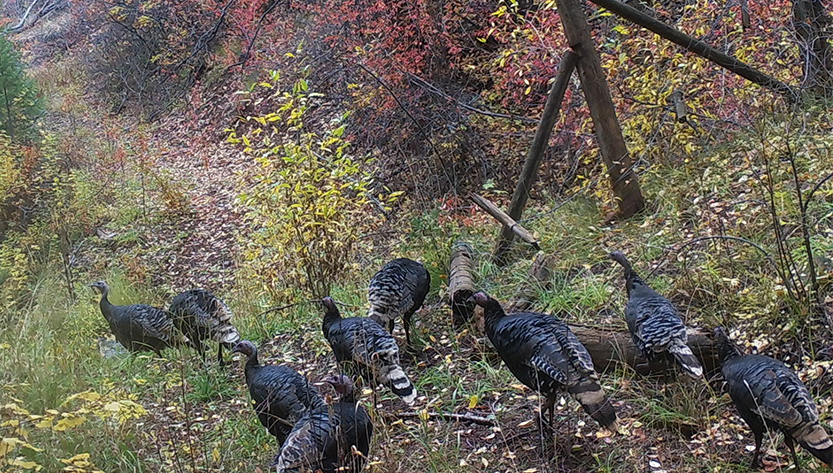 A flock of wild Merriam turkeys