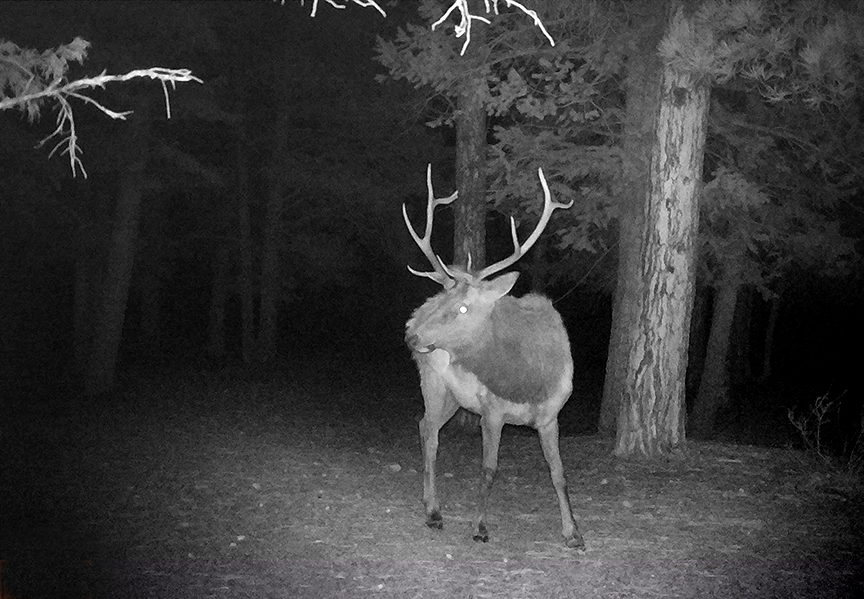 An elk in early spring at Avalanche Creek.

Avalanche Creek Road in the Crystal Valley traverses severe winter habitat for bighorn sheep and elk, but visitors to this wintertime destination should count themselves lucky to see either of those species.

Declining herd populations coupled with frequent use of the area for winter recreation has had an impact. Even more distressing – to wildlife and wildlife managers – are the number of people walking and skiing with dogs, in clear violation of posted signs that indicate dogs are prohibited during the winter months.

This is the fourth winter season that the Forest Service has monitored Avalanche Creek Road with the use of one or more motion-triggered wildlife cameras provided by Pitkin County Open Space and Trails. The entire area is closed to dogs from Nov. 23 through May 1 and the area north of the road is closed to humans. While people may walk, snowshoe and cross-country ski, even those activities have an impact, according to Philip Nyland, wildlife biologist for the Aspen-Sopris Ranger District. More recently, bicyclists have joined the mix, though the road is closed to biking during the winter months.

While many people comply with the dog prohibition and leave their pets at home, camera data so far this winter shows about one in every five groups of people have a dog or dogs with them, Nyland said.

“That’s a tremendously high number,” he said. “The number of dogs back in there is really high for an area that is important to wildlife during winter.”

Instinctively, wildlife – such as deer, elk, sheep and moose – look at dogs (leashed or not) as predators, according to Nyland. An elk doesn’t distinguish between a Labrador retriever and a wolf. Dogs create stress, raising the metabolic rates of animals like elk, sheep and deer, causing them to burn calories at a time when the animals need to conserve their fat stores. For the area’s bighorn sheep herd, already struggling with factors of winter weather and snowpack, body health, and constant vigilance for predators, human-caused stressors only add to the challenge.

The Avalanche wildlife camera is not optimally placed to spot bighorn sheep. Rather, it is placed to monitor deer and elk, but these animals are photographed infrequently, and most often at times when humans are not present – at night, for example. Monitoring suggests areas with high use by humans and pets are seeing less use by wildlife.

“In winter, these animals need solitude. If they’re not resting and digesting, they’re eating,” Nyland said.

While sightings of bighorn sheep along Avalanche Creek Road are not nearly as common as they once were, visitors at Penny Hot Springs, an Open Space and Trails property farther south along the Crystal River, are regularly treated to a glimpse of bighorns at Filoha Meadows Nature Preserve, opposite the river from the springs. All access to Filoha is currently closed and the sheep have become habituated to humans on the opposite side of the river, according to Nyland. Human intrusions into the meadow would drive wildlife away.

“They avoid areas where they don’t see a pattern they can predict,” he said.

That instinct likely keeps wildlife on edge in the area bordering Avalanche Creek Road, which extends about 2.2 miles from Hwy. 133 to Avalanche Campground.

“If we want to have these populations recover, we need to have winter areas where wildlife can feed and rest freely,” Nyland said. “There are other places to walk dogs during the winter. And, there’s less impact by staying on the road – it becomes a predictable event to wildlife.”