Pick up the poop – it’s your doody 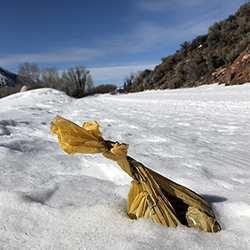 Even before the first wildflowers of spring nudge upward through the matted detritus laid bare by the receding snow, something else will emerge in fetid, unsightly quantities. Nothing spells springtime in our corner of the Rockies like a winter’s worth of dog poo.

While unattended poo – or abandoned bags of excrement (the textbook definition of a job half-finished) – is a year-round issue, it is most apparent when spring snowmelt unveils a winter’s worth of pet owner indiscretions.

Other notable problem spots on open space include Jaffee Park and the Jaffee River Trail, and the Arbaney Kittle Trailhead area. Like Smuggler, these are off-leash areas where owners need to pay attention and pick up after their pooches, even if they do their business off the trail.

Rangers do not, as a rule, pick up after dogs or after owners who leave the bags behind. “If we picked up poop, that would be the only thing we did,” Norman said.

However, if a ranger observes someone failing to pick up after their dog, or leaving the loaded bag on the ground, a citation is automatic, Norman added. The “I was going to pick it up later” explanation does not fly.

The county does its part to assist dog owners by purchasing roughly 90,000 compostable dog waste bags per year at a cost of about $3,000 annually. In addition, the open space maintenance crew keeps 15 trailhead stations flush with the bags and empties the waste cans that fill up with bags of poo.

In early February, Open Space and Trails began supplying bags at the closure gate on Prince Creek Road after receiving complaints about accumulating dog poo on Prince Creek Road and the lower trails of the Crown. This area is not within Open Space’s jurisdiction, but a Carbondale resident has offered to keep the bag station stocked for the duration of the winter closure.

There are two stations on Smuggler Mountain Road where, by our best guestimate, bag use averages upwards of 400 bags per busy week for the two sites. In its quest for a greater understanding of the implications presented by 400 bags of poo in a week, OST engaged in the sort of research that is only undertaken when knowledge its own reward.

Our willing and dependably regular (twice a day, sometimes three) subject provided what we consider the average morning sample deposited by an average dog. We weighed said offering. Obviously, some dogs are much larger and some are much smaller, and their contributions to science would differ in size and weight, but our 51-pound pooch provided a sample that tipped the scale at 4 ounces. Multiply that by 400 and it comes to 100 pounds of feces per week collected on Smuggler Mountain Road, plus or minus a lot. The good news, of course, is that 100 pounds of dog waste a week is dealt with appropriately, assuming the bagged poo was actually deposited in a waste receptacle.

It’s the quantity of dog waste that is not picked up that is problematic. The plethora of potentially harmful bacteria contained in the waste has been well-documented, as have the impacts of dogs on wildlife, but new to the discussion are the results of a study in Belgium, published last month and widely publicized.

Researchers in Belgium focused on a heretofore largely ignored impact produced by man’s best friend – the ecological effects of dog poo. They focused on the transition zone between urban and rural areas (think Smuggler Mountain Open Space or Hunter Creek), where dogs are often walked. According to the study, dogs doing their doody in the great outdoors are causing damage in the form of overfertilization – a result of the nutrients contained in their waste and urine. Researchers found concentrations of phosphorus left along footpaths that exceeds legal limits for the application of fertilizer on agricultural lands.

“It is clear that the levels of fertilization by dogs estimated here can potentially exert negative effects on biodiversity and ecosystem functioning of species-rich vegetation,” the researchers concluded. “Higher nutrient levels lead to increased plant growth, mostly by a limited number of nutrient-demanding species that will outcompete specialists, particularly by taking away available light, causing plant species loss and homogenization of plant communities.”

On beaches, the fertilizer effect of dog waste adds a new element to the specter of marine pollution, researchers said. The study suggested land managers consider banning dogs from certain environments, or requiring short leashes to minimize the zone of impact.

A bit of encouraging news, also noted in the study: Picking up the feces removes 97 percent of the deposited phosphorus and a little more than half of the nitrogen, countering the oft-spoken contention that leaving the waste on the ground to decompose is a suitable approach. In short, it’s not. Pick it up!