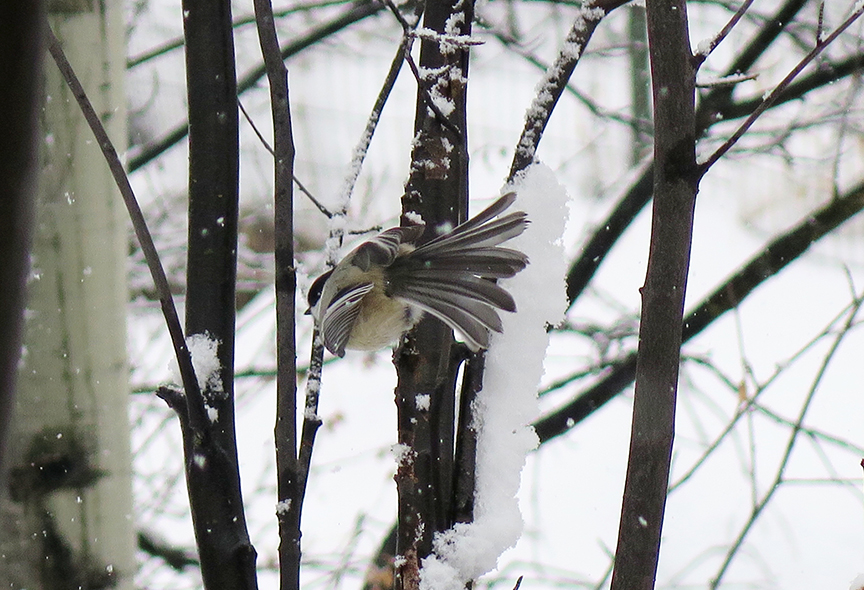 Then there comes a time when it is almost the only thing to lend a touch of life and a note of gladness to the bleak outdoors. – William Atherton Dupuy

Dupuy’s assessment of the chickadee, published nearly a century ago, could not be more apt. The chickadee’s cheery chick-a-dee-dee call greets us all winter long, when many other species have abandoned the mountain landscape for more temperate climes. When staying warm is for the birds, the chickadee rises to the occasion, braving winter blasts and frigid temperatures to flit among our forests year-round.

It’s easy for both birds to fade into the background of woodland inhabitants when summer brings a colorful array of songbirds back to the mountains, but the chickadees shine on the coldest, darkest days of winter. Just how these tiny creatures survive the icy chill is one of those miracles of nature.

All wintering birds have methods of coping with the cold. Who hasn’t seen a duck or goose tuck its bill beneath a wing? They’re breathing warmed air when they do that. Standing on one leg and then the other helps conserve body heat, though birds also have specialized scales on their legs and feet to help curb heat loss. In addition, birds employ “counter-current exchange” in their legs and feet. Essentially, warmed blood leaving their body for the extremities passes very close to the vessels carrying blood back to the body, warming the cold blood as it returns. Further, the temperature of a bird’s feet is regulated at far lower temperature than their body core.

When chickadees and other species plump up, seemingly doubling their body size, they’re actually fluffing the downy feathers beneath their long exterior feathers. The down traps tiny layers of air warmed by heat radiating from their bodies. The more air they trap, the warmer they are, but it comes with a trade-off. A fluffed-up bird standing on one foot can’t take flight to escape a threat as quickly as it otherwise would. The technical term for fluffing is ptiloerection (ptilo, from the Greek, meaning feather; the “t” is silent). Anyone who owns a down jacket or sleeping bag knows the value of fluffy down.

Tiny birds also shiver, but not in the way mammals do. According to Audubon.org, birds shiver by activating opposing muscle groups, creating muscle contractions that retain the bird’s body heat without a lot of jiggling.

Nighttime is the harshest and most critical time for birds. Chickadees will huddle together, sometimes in communal roosts with other species, inside a cavity or tucked within a dense, protected tree or shrub. If you see a chickadee with a bent tail in the morning, chances are it spent the night in a packed cavity with other birds (“Birds of Aspen and the Roaring Fork Valley”). The tail will straighten out as the day goes on.

Both black-capped and mountain chickadees have the ability to lower their body temperature at night – a survival mechanism that allows them to conserve energy. Come morning, they must replenish their fat reserves. Birdfeeders will see a burst of activity when the sun comes up. Chickadees eat more than 35 percent of their body weight every day, according to the U.S. Fish and Wildlife Service (USFWS), but keep in mind, chickadees weigh less than half an ounce. They store great quantities of seed for the winter months and continue to stash food during the winter by carrying off seeds from birdfeeders. Compared to other birds, they have a large hippocampus – the part of the brain responsible for spatial memory – allowing them to remember where they’ve stored thousands of food caches, according to the USFWS. In the fall, this part of their brain gets even bigger. Each year, neurons containing outdated information die off, making room for new data, according to All About Birds.

In short, the sight of a chipper chickadee during the depths of winter’s deep freeze should engender respect and admiration, warming the hearts of all who encounter this jovial survivor.

“…in the most boisterous weather, requiring neither food nor shelter there, [the chickadee] may be seen amidst the snow in the rugged paths of the cheerless woods, where it welcomes the traveler or the woodcutter with confidence and cheerfulness…” – John J. Audubon