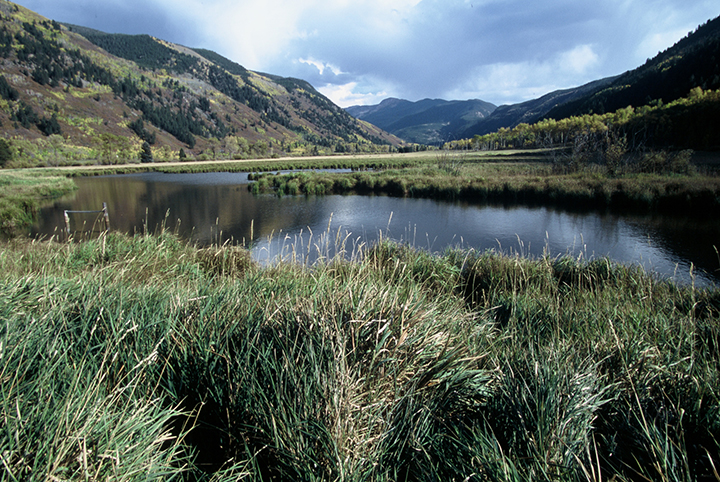 The average person might call it a swamp.  The average rancher might want to drain it.  But a fen, like the one at North Star Nature Preserve, an open space property near Aspen, is actually an “old-growth” wetland that can be thousands of years old.

A fen is a groundwater-fed wetland with saturated organic soils commonly known as peat.  Fens develop when the rate of plant growth exceeds the rate of decomposition of plant litter. The result is the accumulation of organic matter, i.e. peat.

Here’s what the 2018 Wetland Fen Assessment & Floristic Inventory of North Star Nature Preserve has to say on the subject:

“Fens are rare and ecologically significant wetlands in Colorado and the Rocky Mountains and are colloquially known as ‘old-growth’ wetlands because they can be thousands of years old.  They are ancient ecosystems 8,000 to 12,000 years old.  Even though they occupy a small percentage of the landscape, they provide important headwater quality functions, including carbon storage, wildlife habitat and biodiversity.”

Various wetland areas at North Star were most recently sampled in 2017.  The hand-dug soil pits revealed no additional fens, but North Star’s sole identified fen, in the northwest corner of the property, held peat that is more than 53 inches thick.  That means the fen is at least 3,271 to 12,000 years old, according to the assessment report.  It is likely older, though, since the actual depth could not be determined with a hand-held shovel (a long probe is recommended for a future reassessment).

North Star is an ecological sanctuary that encompasses significant wetland and riparian ecological communities and wildlife habitat.  The property is managed to preserve these attributes (most of it is off-limits to the public) and continually monitored.  The goal is making sure the healthy components of North Star’s ecosystem remain that way and identifying areas where prior activities on the land have generated the need for intervention, whether it is weed control, riverbank restoration or stabilizing the groundwater table.

For example, a ditch once used in a rancher’s effort to drain the fen has been permanently closed, using a headgate, by Pitkin County Open Space and Trails as part of its maintenance of the property.  In 2019, the goal is to fill in the ditch permanently.