Martens in our midst, and under study 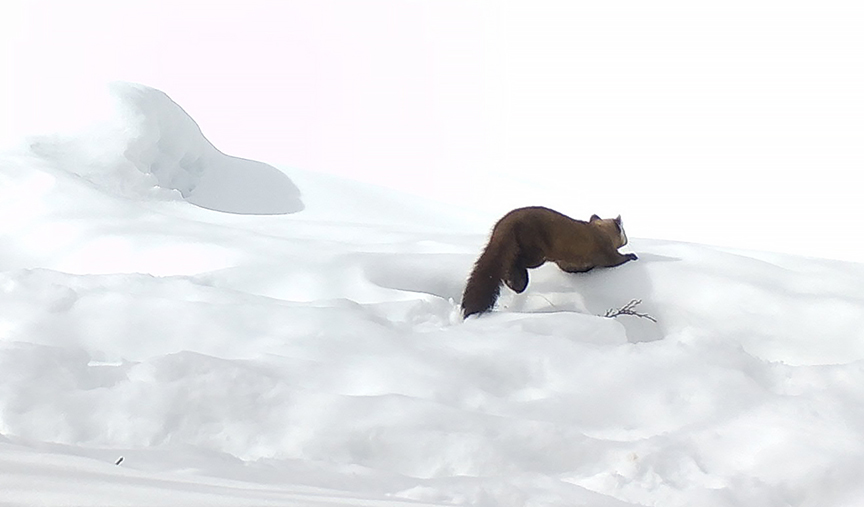 A pine marten, captured by a wildlife camera, bounds across the snow.

There’s a killer in the woods, but only small mammals need worry.

It’s commonly known as the pine marten, a ferocious predator with a cute countenance and luxurious pelt, but in Colorado, not a lot is commonly known about it, at least from a species conservation standpoint. Biologists are taking a closer look.

Even the taxonomy of this species has undergone a rethink. Once identified as the American marten (Martes Americana), the marten that ranges across parts of Colorado and other Western states has been reclassified as the Pacific marten (Martes caurina), though Idaho and Montana are home to both species. The American marten’s range includes northern border states, the Great Lakes region and the Northeast. Canada and Alaska also boast both species.

NatureServe identifies the marten population in Colorado as apparently secure, while the Forest Service considers the marten a species of concern across the Rocky Mountain region, including in the surrounding White River National Forest, according to Phil Nyland, wildlife biologist with the White River. Martens and their habitat are taken into consideration when the Forest Service reviews projects ranging from ski runs and roads to logging, hut permits, prescribed fires and brush clearing – essentially any development within their range, he said.

Colorado Parks and Wildlife is taking a closer look at martens with the goal of better assessing the population numbers of this species. Localized studies in the Steamboat Springs and Creede areas, employing an array of wildlife cameras, are intended to provide better information about marten population density. The data will help inform the issuance of furbearer licenses, required for the taking of animals for their pelts. Trapping of martens in Colorado is permitted with a license. The licensing system itself has been revamped to collect better data on animal harvests; information regarding the marten harvest last year is not yet available.

CPW has also studied the impact of beetle-killed forests on martens, along with a host of other mammals, deploying close to 275 wildlife cameras for the effort. The analysis indicated red squirrel use of spruce-fir and lodgepole pine forests was affected in beetle-kill zones, but marten use was not, even though martens prey on red squirrels and use their middens as resting and denning habitat.

It’s just another example of martens defying expectations. According to CPW, a marten’s favored habitat is old-growth subalpine forests of spruce, fir or lodgepole pine, yet they are seen in forests of mixed conifer and deciduous trees, and even scrub oak environments. Martens have been documented, with wildlife cameras, on various Pitkin County open spaces, including North Star Nature Preserve, Sky Mountain Park and Filoha Meadows Nature Preserve.

Decimated by the fur trade in the 1800s, martens in North America have rebounded. They are members of the weasel family, along with the long-tailed weasel, short-tailed weasel (ermine), fisher, ferret, badger, wolverine, mink and otter. Unlike long- and short-tailed weasels, martens do not turn white in winter, instead sporting a lush, chocolate coat with a straw-colored or orange bib.

Today, trapping and loss of habitat through the clear-cutting of timber are apparently the biggest threat to martens, according to CPW.

These weasels tolerate human presence, and mountain cabins and ski huts are where people often enjoy a glimpse of a marten bounding about in deep snow, thanks to toes that are webbed at their base and furry feet that help keep them from sinking. Martens do not hibernate and the warmth beneath the huts makes them attractive for a marten’s winter home, Lowsky theorized. In the old days, a marten was the resident mouser in many a miner’s cabin, according to CPW.

Aspen’s historic newspapers don’t make note of marten mousers, but in April 1985, a marten earned mention in the Around Aspen feature of the Aspen Times Weekly. A regular visitor to a cabin in Little Annie Basin where it had scored scraps of meat all winter, the marten raided the place while its owners were away on Easter Sunday, making off with 14 dyed Easter eggs, a bag of jelly beans and three apples, according to the report.

Red-backed voles, pine squirrels, mice, nesting birds and other small mammals are all fair game for sharp-toothed martens, but they will also eat bird eggs, berries and even insects, as well as larger animals such as rabbits, given the opportunity. They’re considered an arboreal species, living in trees, but also spend considerable time hunting amid fallen timber and in the tunnels of voles and other rodents beneath the snow.

“They are voracious predators. They kill and eat their prey almost entirely. In the wintertime, they will burrow under the snow down around logs and base of trees in search of their prey. They’re cute, silent killers,” said the Forest Service’s Nyland. “They’re a born predator – a born killer.”

Male Pacific martens are about two feet long, with a bushy tail of 6.5 to 7.5 inches; they weigh 1.3 to 2.2 pounds. Females are smaller, weighing up to 1.5 pounds. They mate in the summer, but the female’s embryos don’t implant until early spring. One to five young are born in April.

Wintertime may be the best time to spot a marten during the daylight hours.

“They are cool,” Nyland said. “Any trail outside of Aspen, just start walking uphill. You’ll get into marten habitat pretty quick. We just count ourselves lucky that we have them.”

“Some people don’t even know that these little critters exist,” said Heather Halbritter, wildlife biologist with CPW’s northwest region. “It’s the mystery of them that’s a little bit of their allure. 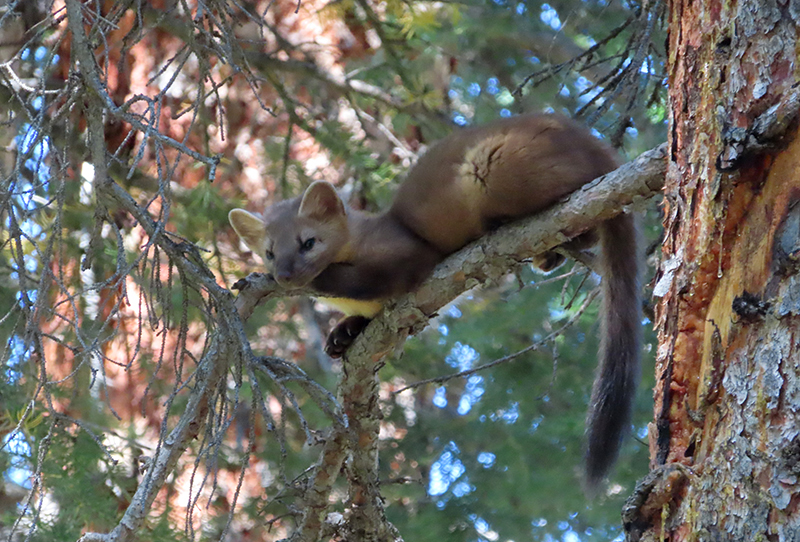