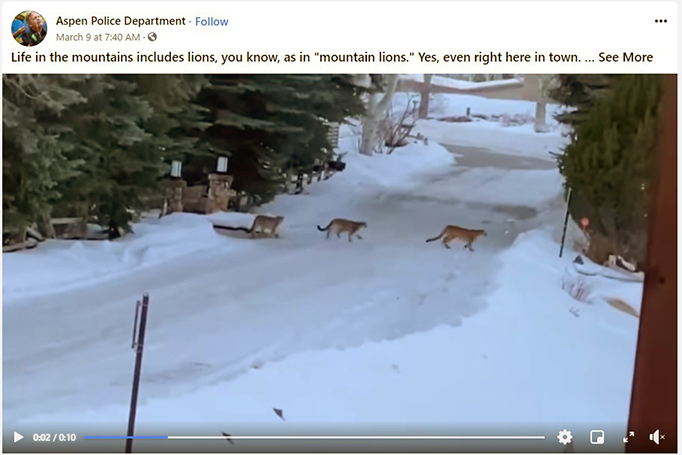 An eye-popping video of three mountain lions making their way through Aspen’s West End neighborhood recently made a social media splash, but the presence of the big cats shouldn’t come as a surprise.

Mountain lions as a species (Felis concolor) are doing well in Colorado, and humans and lions share the same spaces. Though many of us have never seen a lion – or cougar, as they are also known – rest assured the opposite is not true.

“I tell people all the time, if you go outside, a mountain lion has seen you,” said Randy Hampton, public information officer for the northwest region of Colorado Parks and Wildlife.

CPW estimates there are between 3,800 to 4,000 mature mountain lions in the state – a number that doesn’t include dependent young that have not yet separated from their mothers. With the increased use of technology, namely home security cameras, people are seeing lions that would previously have escaped notice, much like the trio of lions trotting across a residential street in Aspen.

Pitkin County Open Space and Trails, too, occasionally documents lions with its array of wildlife cameras. Open spaces that are frequented by thousands of hikers and bicyclists seasonally are also home to mountain lions. Human sightings of these denizens are rare, though. So are daytime photos of lions on area trails. Most often, these predators are photographed at night.

“They’re incredibly illusive,” the CPW’s Hampton said. “They tend to be more nocturnal in areas where they are avoiding people.”

Hampton began working with CPW, then the Colorado Division of Wildlife, in 2003 and has yet to see a mountain lion in the wild except in conjunction with a CPW operation – releasing a rehabilitated cat, for example.

“As somebody who hikes and hunts and fishes and bikes, I’ve never seen one in the wild,” he said.

Outside of lion-specific work, Phil Nyland, wildlife biologist for the Aspen-Sopris Ranger District of the Forest Service, said he has caught a fleeting glimpse of a lion on just three occasions in more than 25 years of field work even though he recognizes the signs of lions that an untrained eye would easily miss.

Many people would no doubt prefer to enjoy a lifetime of outdoor recreation without ever encountering a lion. While lion attacks on people are rare (one in Colorado last year), encounters have increased as human populations expand into mountain lion habitat.

Of the 868 reports CPW fielded about mountain lions in 2020, 15 came from Pitkin County, including one incident in which a deer carcass was dragged to someone’s back door. The remains of the deer were relocated.

Lions are active year-round and deer are its main prey. An adult lion can eat a deer a week, gorging on the carcass until it can eat no more, according to CPW. Often a lion will cover what’s left with leaves or conifer needles while it fasts for a few days and digests the meal. Then it may return to the cache to eat the leftovers.

Mountain lions have the largest geographic range of any native mammal (other than humans) in the Americas, ranging from western Canada to Argentina, but in the U.S., eastern populations are extinct or endangered. The West is their stronghold, according to CPW.

That wasn’t always the case. In the early 1900s, the killing of lions was not only unregulated, it was encouraged. Then, in 1965, the Colorado Wildlife Commission changed the status of lions from predator to game mammal. Hunting seasons were established to ensure sustainable populations, allowing the species to recover after decades of persecution.

During the 2019-2020 hunting season (Nov. 23-March 31), 3 lions were harvested in Pitkin County. Two more were killed by vehicles, according to CPW. This season, CPW has opened a new area south of Aspen to lion hunting and adjusted the quota system throughout the Roaring Fork Valley – a move that could increase the harvest in an area where lion incidents appear to be on the rise.

Incidentally, Colorado hunting laws require that edible wildlife meat be processed for human consumption, and mountain lions are no exception. “Mountain lion is actually very good – it was the one time I had it,” Hampton said.

Harvest data from the current hunting season is not yet available, but lions have been in the spotlight this spring. CPW recently released a four-part series of educational videos about mountain lions that uses images and videos from around Colorado, including some collected by the agency and by individual residents who supplied footage from their home security cameras. The goal is telling the history of the mountain lion in Colorado and learning to live with these predators in our growing state. Take a look.

Episode 4 – What to do if you encounter a mountain lion

You may never see a lion, but it’s not unusual to encounter their prints, especially in the snow, if you pay attention. “Once you’re in tune to the tracks, they’re not uncommon,” said Phil Nyland, wildlife biologist for the Aspen-Sopris Ranger District of the Forest Service. Look for three lobes at the bottom of the pad and a round print that is 3 to 3.5 inches wide (canine prints tend to be oval – longer than they are wide). No claw marks are typically visible on a lion print because cougars have retractable claws; they are virtually always visible on a canine print.

These mountain lions were photographed by motion-triggered cameras at Sky Mountain Park and Glassier Open Space. A lion’s long, graceful, black-tipped tail (it’s about one-third of their body length) is unmistakable, if you happen to see it.