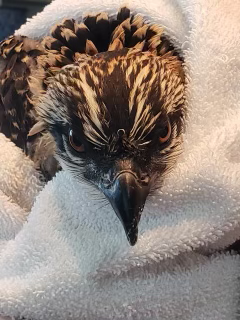 Since an Osprey chick was inadvertently dragged out of its nest at Emma Open Space on June 22, humans have taken over its care, with the goal of releasing it back into the wild. Still, its fate remains uncertain.

Emma Osprey fans who happened to be watching the live feed from the nest on the afternoon of June 22 saw both of this year’s hatchlings tumble over the edge when the mother’s talon(s) seemingly caught fishing line that was also entangled with nesting material. The chicks, sitting atop the material, were dragged off the nest. One perished in the fall.

Apparently, Osprey Cam viewers responded to the scene and recovered the chick that survived the roughly 35-foot fall. A good Samaritan transported the hatchling to the Birds of Prey Foundation raptor rehabilitation facility on the Front Range that same day.

During its first week there, the chick was lethargic and slept most of the time, said Heidi Bucknam, the facility’s executive director. Immediate treatment included administering an anti-inflamatory and placing the bird in an oxygen-rich incubator, which can help in the event of head trauma, she said. A week after its arrival, the chick was “a little brighter and hungrier” and had begun to stand up at feeding time, Bucknam reported.

“I think that it was quite the trauma,” she said.

The caregivers quickly confirmed that the young Osprey did not suffer any broken bones in its fall, but internal and soft-tissue injuries can’t be diagnosed and remain a possibility. It will take time to determine whether internal injuries are present, Bucknam said.

The first of the two chicks hatched at the Emma Open Space nest this year emerged May 25; the second likely hatched a day or two later. The surviving chick was roughly a month old when it fell and was still a month away from fledging (being able to fly away from the nest).

“I’ve been doing this for 33 years and this is always my greatest fear – to get an Osprey,” Bucknam said.

While the facility has cared for Ospreys before, the Emma chick is the youngest one it has ever received, she said. Bucknam began researching her patient. Ospreys are piscivores (their diet consists almost exclusively of freshly caught fish) and they migrate a considerable distance, spending winters in South America. Can a chick raised in captivity successfully fish and find its way south? The answer to both questions is, yes. Research shows Ospreys have an innate ability to both catch prey and migrate. They are not dependent on parent Ospreys to teach them these skills.

Only time will tell whether the Emma chick is able fly and fend for itself. Returning the young bird to the Emma nest is unlikely, Bucknam said. While the Emma Osprey parents have been seen visiting the nest for brief periods in the aftermath of the fall, the chick is probably too traumatized to be safely returned to that lofty perch, according to Bucknam. And, there’s the lingering question of its condition. If it appears it can eventually be released, rehabilitators will introduce it to a place with an Osprey population, including young birds if possible, where it can resume life as a raptor in the wild.

The Emma Osprey parents will eventually migrate as usual, but are expected to return to the nest next spring. Ospreys mate for life, but spend their winters apart before reuniting at their nesting site.

The Birds of Prey Foundation facility has admitted 210 birds – all raptors (carnivorous birds of prey) – so far this year, according to its website. Director Bucknam asks that people concerned about the Emma chick NOT call the facility. The staff is busy and can’t respond to multiple inquiries about an admitted bird. Pitkin County Open Space and Trails (OST) will receive updates and post them to social media. Those who would like email updates should email open_space_trails@pitkincounty.com and ask to be added to OST’s Osprey contact list. Those who would like to assist the Foundation in its mission can find out more at its website.

The history of Emma’s Ospreys

A breeding pair of Ospreys first began nest-building at activities at Emma Open Space in 2010. No young birds were reared that year, but the Osprey pair’s return in 2011 was anticipated, so Holy Cross Energy relocated the nest from a utility pole carrying live wires to an adjacent pole in late 2010, after the birds had departed for the winter.

Open Space and Trails began tracking the birds each nesting season after a nest camera was installed in the fall of 2015. The Ospreys returned in 2016, but their eggs proved unviable and no chicks hatched that year. In each year since, the breeding pair have reared two or three young birds. While nest failure among Ospreys in general, for a variety of reasons, is not uncommon, the Emma pair had seen a string of successes until this year’s unfortunate turn of events.

This year marks the third occasion in which stray fishing line has troubled the Emma Open Space Ospreys. In 2019, a fledgling wound up entangled in line that was also attached to the nest. It eventually managed to break free. In 2020, a fish hook (of the type used for bait fishing) wound up embedded in the mouth of a hatchling. A Colorado Parks and Wildlife officer removed the hook and length of line from the bird’s mouth with the assistance of a Holy Cross Energy crew and bucket truck. This year, the Ospreys were not so fortunate.

While Osprey nests in some other locations are constructed with all sorts of human refuse, the Emma nest has remained one built primarily of natural materials, though it appeared a windshield wiper was incorporated last year. Fishing line, brought to the nest attached to trout or branches used to augment the nest, have been the sole human-caused threat to the Ospreys at Emma Open Space thus far.

What anglers can do 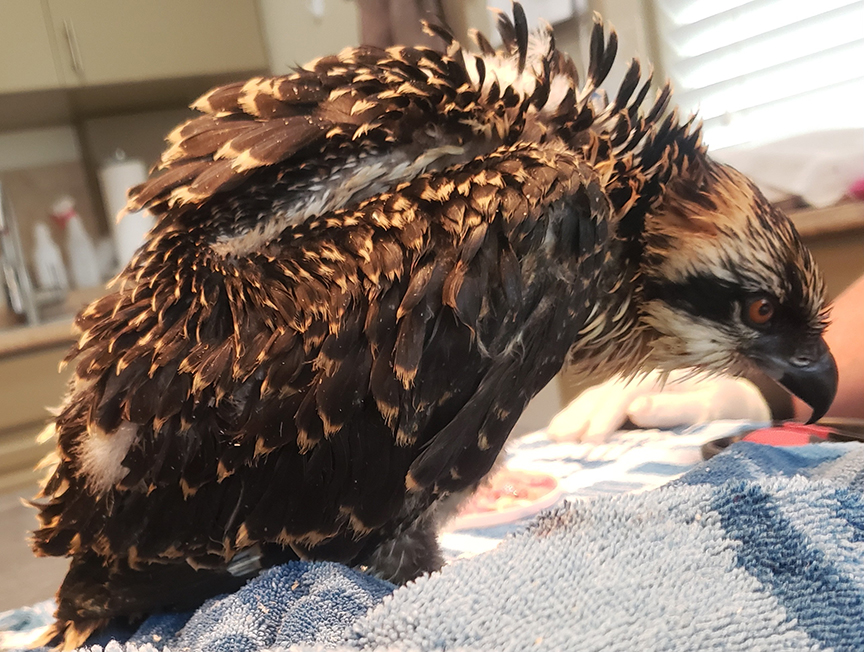 The Emma chick on its feet in rehab. 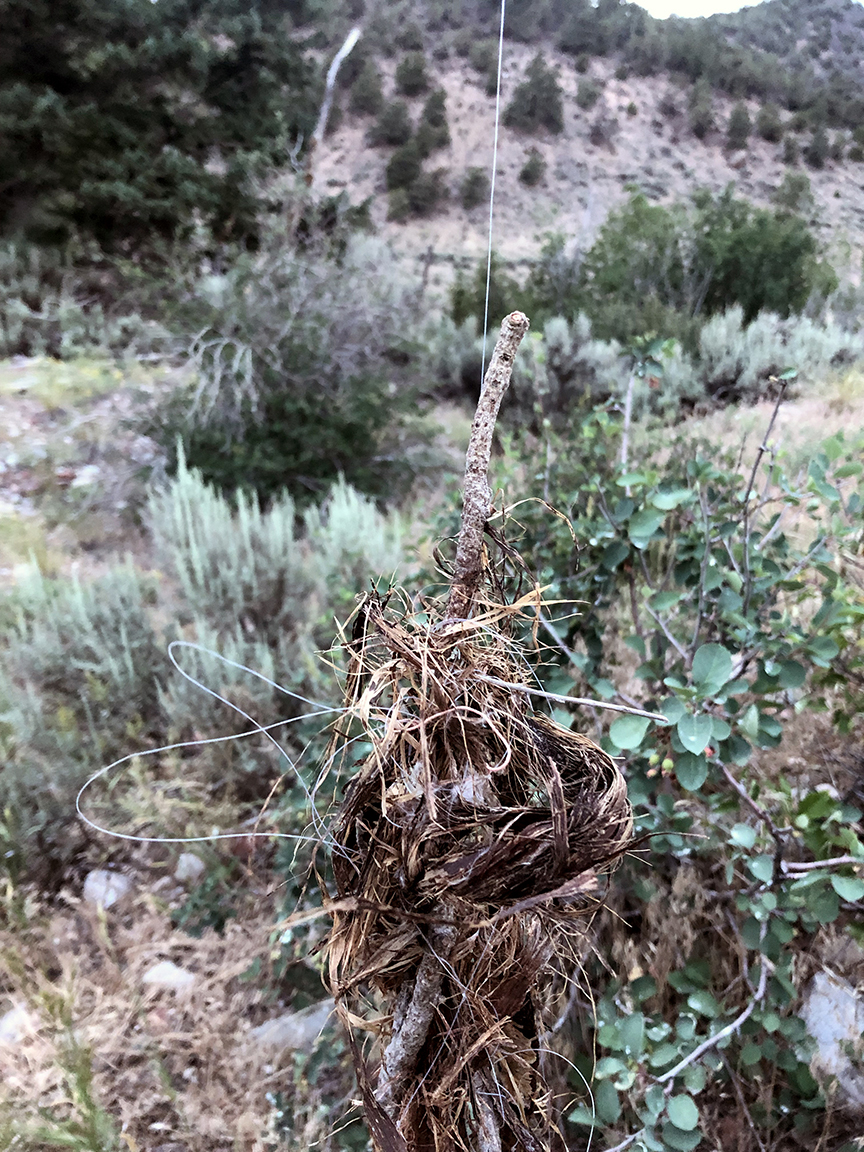 Fishing line and nest material, dragged off the nest. 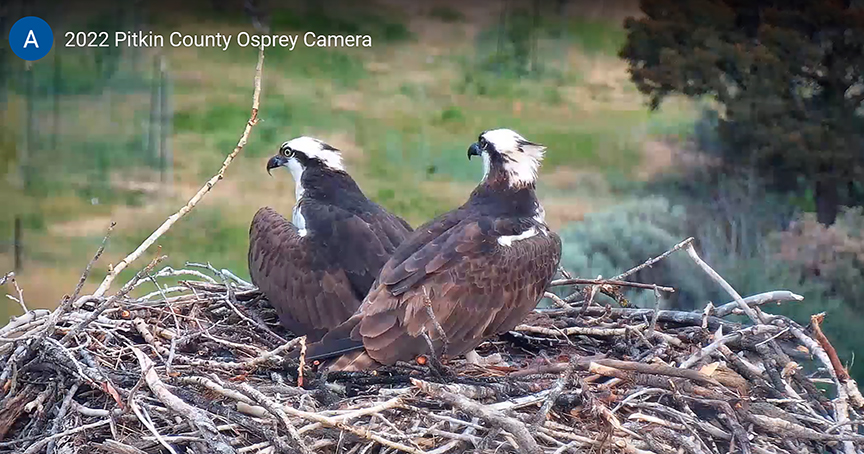 The Osprey parents check in at the nest.