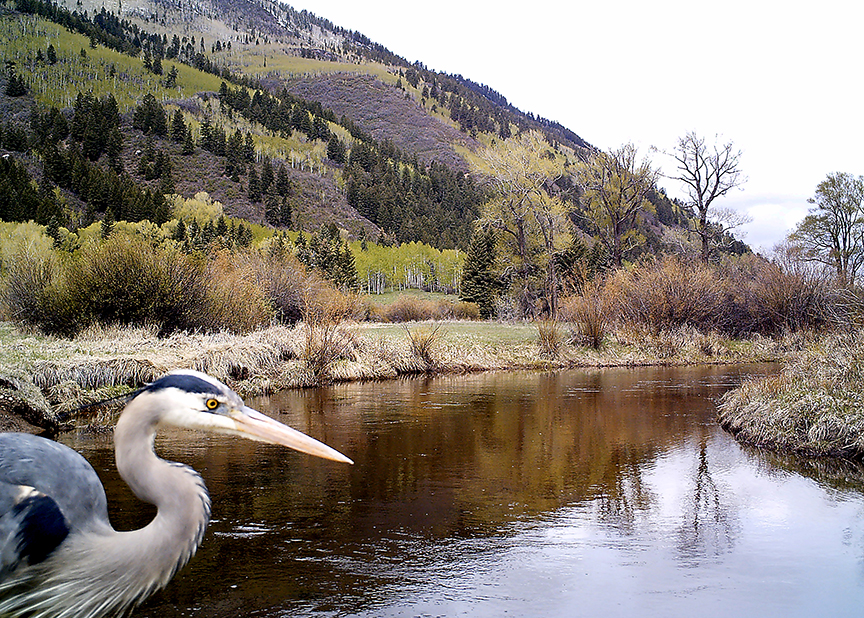 Since at least the 1980s, great blue herons have been observed around the east of Aspen area, which is at the higher end of this bird’s known elevation range.

The James H. Smith portion of North Star was the site of an active nesting colony that moved in 2006 from the west side of the river to the east side. Some herons successfully raised their young at the east location for several years, though the numbers never equaled those at the previous nesting site, according to data collected by volunteers and wildlife consultants. While these impressive wading birds are still seen hunting (fishing, really) at North Star and flying overhead, they have evidently moved on from these nesting sites.

Interested in the impetus for the herons’ recent move away from nesting sites on the James H. Smith parcel, Open Space and Trails hired a wildlife consulting firm, Colorado Wildlife Science, to conduct a targeted study assessing the North Star heron colony. A 2018 technical memorandum provided the results of this assessment and a summary of existing literature on great blue heron colony movement.

The assessment cited published research on great blue herons, their colonies and factors that may lead to their relocation. Great blue heron colonies are, by their nature, dynamic, and there is ample evidence that herons relocate from time to time, especially if the colonies are small. For example, the heron colony on the lower Roaring Fork River at Cattle Creek – the largest in the Roaring Fork watershed – has moved above and below Cattle Creek’s confluence with the Roaring Fork River several times over the past two decades. We do not know the ultimate cause of this colony movement, but it appears the birds choose new stands of pines or cottonwoods in which to nest as the old nesting trees decline in health. Interestingly, the presence of the herons themselves contributes to the decline of nest tree health, as the accumulation of feces below their nests can damage foliage and alter soil conditions.

Human activity, especially motorized activities, within or near active heron colonies has been associated with reduced productivity and nest site abandonment, some studies show. Other studies show evidence of heron colonies persisting in areas with significant human disturbance, such as next to tennis courts or highways. Additional elements that factor into colony relocation or abandonment include the presence of predators (including raptors, raccoons and domestic cats) and climate and weather patterns (for example, a cold, wet, late spring might preclude herons from returning to nest locations at higher elevations).

The decrease in nesting herons and successful rearing of offspring at North Star coincided with both increased recreational use of the river and a serious decline in the nest stands themselves, according to Colorado Wildlife Science.

The Colorado Wildlife Science assessment offered these factors and observations regarding heron colony longevity, based on various studies of the birds:

In 2014, Golder Associates, another ecological consulting firm, assessed the ecological communities at North Star Nature Preserve and made several recommendations to promote the persistence of the heron colony at the open space. One recommendation was to establish a quiet zone beneath the colony to create a buffer and minimize disturbance near the nest site. In the 2015 North Star Management Plan, Open Space and Trails instituted a 200-meter quiet zone near the heron nests and completely closed access to the land beneath the nests, where a seasonal trail had existed previously.

Other recommendations included additional plantings and protection of young trees between the river and nesting sites on both sides of the river to screen recreational activity from herons, and maintaining alternate nest stands and perch trees adjacent to areas where herons forage at North Star. The draft 2020 update to the North Star Management Plan includes actions to address these recommendations.

While great blue herons are not a species of great conservation concern (i.e. not endangered or threatened) and populations across Colorado are stable and doing well, we all enjoy the chance to see these dinosaur-like birds soar above and live in our local open spaces. The Colorado Wildlife Science assessment concludes that both human activity and natural processes have likely contributed to the heron colony relocations. However, active protection of alternate nest stands and foraging areas west of the river (where public access is not allowed), increased enforcement to limit recreation-based noise on the river, and the natural capacity of herons to habituate to human activity make it feasible that great blue herons will continue to frequent North Star and, perhaps, return there to nest.