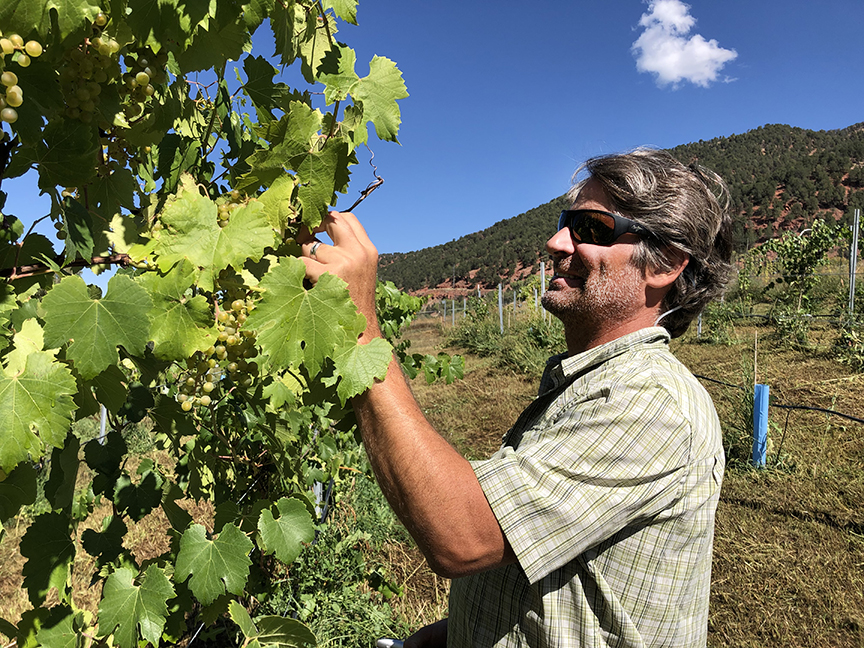 Five years into a venture as the sole winegrower on Pitkin County open space, and possibly in all of the Roaring Fork Valley, Chris O’Connor is still waiting to taste success – literally.

His small vineyard, on a quarter-acre carved out of Lazy Glen Open Space near Basalt, is an experiment born of curiosity, passion, investment and toil. For every vine spreading along a sturdy trellis, impressively laden with bunches of ripening grapes, another is barely more than a single, leafy stalk fighting for supremacy among the weeds, if it’s alive at all. O’Connor won’t be quitting his day job anytime soon, but he’s not ready to give up on the vineyard. Not yet.

A couple of decades ago, O’Connor tried his hand as a home brewer of beer. Later, it was hard cider made from apples that grow along the Rio Grande Trail. He makes wine with grapes purchased from Western Slope growers, but he has yet to raise a glass of wine produced with his own grapes. O’Connor has, however, played around with some names for his label, should it ever come to fruition. “Boondoggle comes to mind,” he said, grinning.

There’s a reason vineyards aren’t common in the Roaring Fork Valley. Actually, there are a lot of reasons, and O’Connor is familiarizing himself with all of them.

“A whole bunch of things have to come together for grapes to work here,” he said. “Each year, it’s a different issue.”

Five years ago, he planted 110 vines totaling 10 varieties; half are red grapes and half are white and each is capable of producing a quality wine, O’Connor said. All are complex hybrids – bred for traits that are key to a successful vineyard on his sloped patch of mowed grass and weeds at 6,800 feet. To thrive, grapes grown here need to meet a host of requirements. They need to be hardy to the winter cold, they need to bud late but ripen early in the short growing season. They need to be pest resistant and produce grapes that ripen with what O’Connor calls a “reasonable chemistry” – high sugar content and low acidity. Some of O’Connor’s vines excel in one area, but fail in another. One withstands temperatures of minus 35 degrees, but is barely reaching the trellis after five seasons of growth.

Then there are the variables of heat, water, soil and even wind. Sustained winter winds can desiccate the vines, O’Connor said. The first year, he lost 35 vines to rodents that damaged the young plants beneath the snow.

Of his 10 varieties, two – one red and one white – are performing well. Three have been utter failures. The jury is still out on the others.

A strong start to this year’s growing season had O’Connor contemplating a harvest that would actually result in wine production – a rosé he could make in his garage.

“I really thought this was going to be the year,” he said. “Things were looking great in May. Then came the 20-degree nights.”

The late-spring cold snap killed much of the budding fruit. Though some of the vines produced new buds, the grapes are now two or three weeks behind in the ripening process.

Last year, O’Connor harvested about 20 pounds of grapes in mid-September. With so little to work with, they went to the compost pile. This season, he was hoping for 100 pounds – enough for perhaps two cases of wine. It would be a very exclusive release, he joked.

Keep in mind, 100 pounds of grapes would represent a harvest from about 25 percent of his vines. A normal expectation for a vineyard would be an 80 percent harvest by year 4 and 100 percent in year 5, he said.

Five years in, O’Connor said he doesn’t see his experiment extending beyond a decade. His goal – finding out whether viticulture (the growing of grapes for wine) in the Roaring Fork Valley is possible – remains unanswered so far.

“Can it be done? Is it something that could be viable? I think the answer is going to be yes,” he said. “Could it be a profitable business? That I don’t know.”

Either way, O’Connor is fairly sure his patch of terroir at Lazy Glen Open Space, where agricultural lessee Shining Mountains Farm embraces the vineyard experiment, isn’t the place for a larger-scale effort.

“Going any bigger than this would be crazy. This is already crazy,” he said. 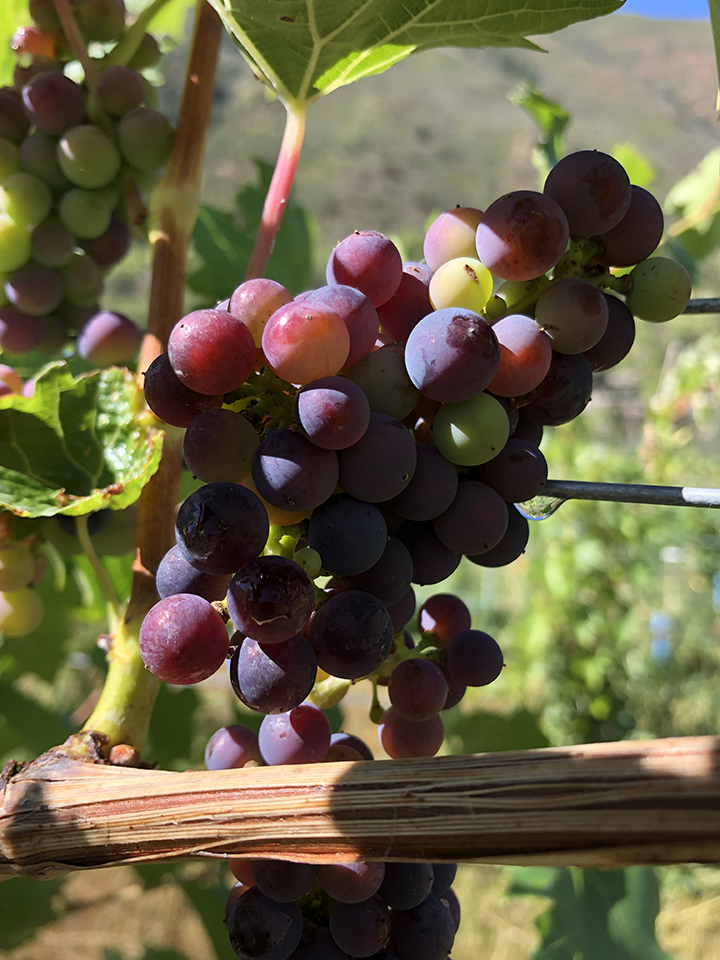 Grapes ripen in the sun at Lazy Glen Open Space. 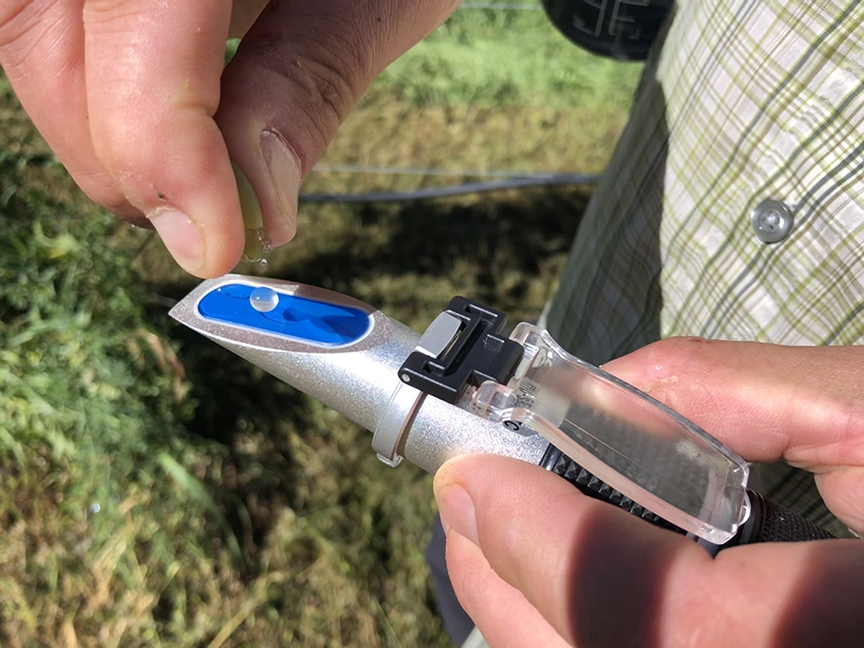 O’Connor uses a refractometer to measure the sugar content in the juice of a grape. 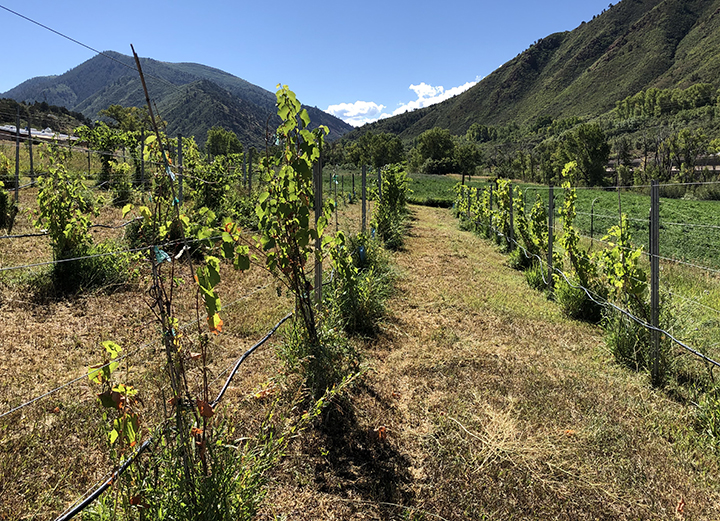