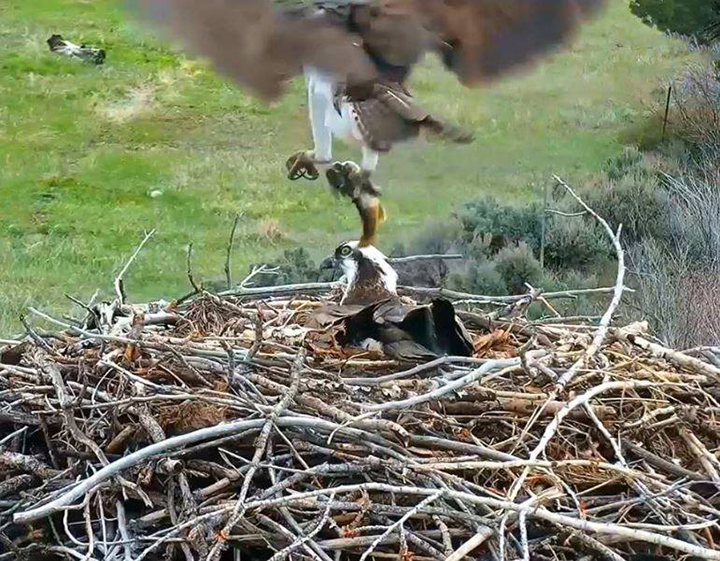 The Osprey nest at Emma Open Space is part of scientific study this year, and fans of the nest activities can play a part.

Citizens locally and elsewhere who watch the goings-on at the Emma nest via the Emma Osprey Cam are welcome to report their observations.

Michael Academia, a fisheries biologist and soon-to-be graduate student at William and Mary (Williamsburg, Va.), is gathering data from Osprey nest cameras to produce a manuscript for The Journal of Raptor Research. Working with camera sites around the U.S. and overseas, his goal is to report fish counts and fish species based on observations of fish being brought to the various nests. Nesting success will also be detailed. The data is to be gathered from participating citizens via nest camera observations. The aim is to establish citizen science and nest cameras as valid and substantial tools for the scientific and educational communities.

Academia is directing some 250 participants, many of them retirees, to watch the Osprey cameras that are part of the study. They will collect data as part of a summer online course sponsored by Dunrovin Ranch. They will record how many fish are brought to the nests, including the one at Emma, each day. Dunrovin Ranch is located in Montana and is also the site of an Osprey nest cam. Anyone watching the Emma nest is welcome to submit their observations via a Share Your Observations form that is accessible from the Emma Osprey Cam web page.

The form is simple to fill out. It asks observers to identify the species of fish brought to the nest, if they can, but “No clue!” is also offered as an answer option. Observers are also asked if it was the male or the female that brought the fish, if they know. There are a few other queries, as well. For those watching the Emma pair, the female is larger and lighter in color. The markings above the beaks of the two birds also help distinguish them (see photo below). The male has a white band wrapping around the front of its head above his eyes and beak. The female has a brown patch that extends all the way to the top of her beak.

Fish species that observers aren’t likely to see here are included on the list, since Ospreys in other locales dine regularly on such species as catfish, carp, bluegills and the like. Trout are the typical food source at the Emma nest, situated close to the Roaring Fork River, though we did see a bluegill (possibly swiped from a private pond) carried in a couple of years ago.

Academia offered this observation regarding the Emma location in mid-May: “Oh…there is some huge trout over there! I’m amazed at what is being brought to the nest. I counted 5 fish today!!”

Fish deliveries will increase when there are hatchlings at the nest. This year, the first hatchling appeared May 30. During the incubation stage, the male sometimes brings a fish to the nest, which the female then flies off with to eat while the male takes a turn sitting on the nest. At other times, the male sits on the eggs while the female flies off to catch her own meal. Once there are hatchlings, the male does virtually all of the fishing, delivering fish that feed mom and are picked apart and fed beak to beak to the hatchlings until they are old enough to pick at the fish on their own.

The observation period of Academia’s project is expected to wrap up Aug. 20. An initial summary of the data should be available soon thereafter. It should be interesting!

Find out MORE about the history of the Emma Osprey nest. 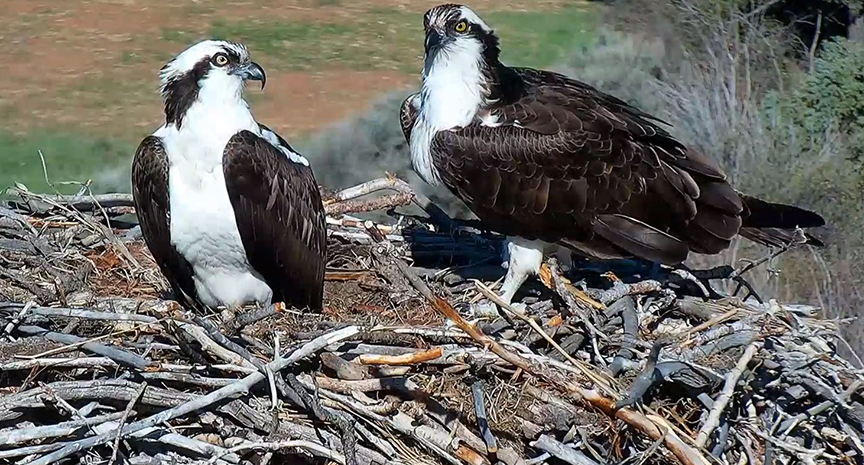 The darker, sleeker male (left) has a white band over his eyes and reaching his beak. The larger female (right), has a dark patch on her forehead, extending to her beak.