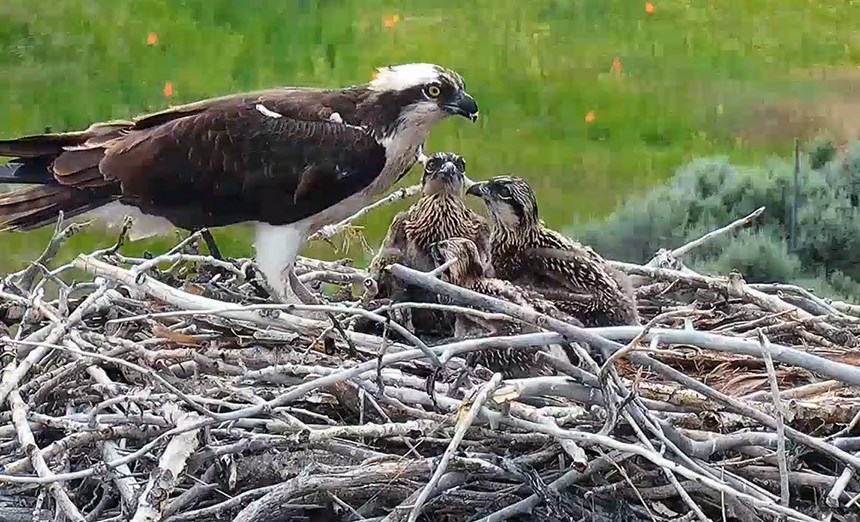 Pitkin County’s open spaces are home to a wide variety of wildlife, but none with a greater fan base than the family of Ospreys at Emma Open Space.

From the time the pair of breeding ospreys return to Emma, usually in late March, until the young fledge in August, the Emma Osprey Cam gives devotees a bird’s-eye view of life atop a tall pole in the midvalley where, for the first time this year, three nestlings are jostling to survive. So far, so good.

Viewers keep tabs on the female Osprey as she begins sitting continuously on the nest (a sign that eggs have been laid). The first tiny, bobbing head generates a great deal of activity for both Osprey parents, and the online chatter heats up (the birds have a group of Facebook followers). During the incubation period, the male brings back fish and takes a spell sitting on the eggs while the female flies off with the meal to dine elsewhere. Eggs are generally laid a day apart and nestlings hatch a day apart to give the oldest chick an advantage in case food is scarce.

This year’s nest dynamics showed the much larger, elder chick pecking mercilessly at the tiny, youngest sibling and outcompeting both of the other nestlings at feeding time, but all three have managed to survive thus far.

Over the years, Osprey cam highlights have included the mother osprey sticking to the nest to keep the eggs warm while late spring snow piled up over her, sheltering the nestlings from sun and pouring rain, the delivery of a bluegill (not the fish you’d expect) at feeding time and the transformation of nestlings from helpless, unsteady, bumpy-skinned creatures to young birds testing out their feathered wings, flapping furiously toward first flight. They become fledglings once they can come and go from the nest.

Typically, the breeding pair of Ospreys at Emma have raised two nestlings each season. In 2016, however, the eggs were apparently not viable and did not hatch. This year’s trio of nestlings will make for some interesting antics as the growing birds compete for food and space. Typically, the male brings fish back to the nest and the female pulls off morsels for the young until they are able to feed themselves. Occasionally, the male helps with the feeding and may pass along morsels to the female.

Ospreys typically mate for life and return to the same nest each year to lay eggs. Young couples may work on a nest for a year or two before laying eggs. At Emma Open Space, a nesting platform was installed in 2010 by Holy Cross Energy after the Osprey pair chose a nearby pole holding a live electric line to make their home. The crossbeams and nest of woven sticks were transferred from the live pole to an adjacent one where the birds, and the electrical grid, are out of danger. In 2011, the birds returned and took up residence on the relocated platform, located directly over the Emma Trail and in full view of nearby Hwy. 82. The nest site is also close to the Roaring Fork River – a key source of food. Ospreys are one of the few raptor species known to eat a diet almost exclusively of fish.

In the fall of 2015, Holy Cross erected a second pole specifically to hold the Osprey Cam. Pitkin County Open Space and Trails partnered with Aspen Center for Environmental Studies, the county’s Healthy Rivers and Streams Board, Pitkin County Information Technology and Holy Cross to install the camera. The original camera was damaged during the summer of 2016 and replaced in time for the 2017 nesting season.