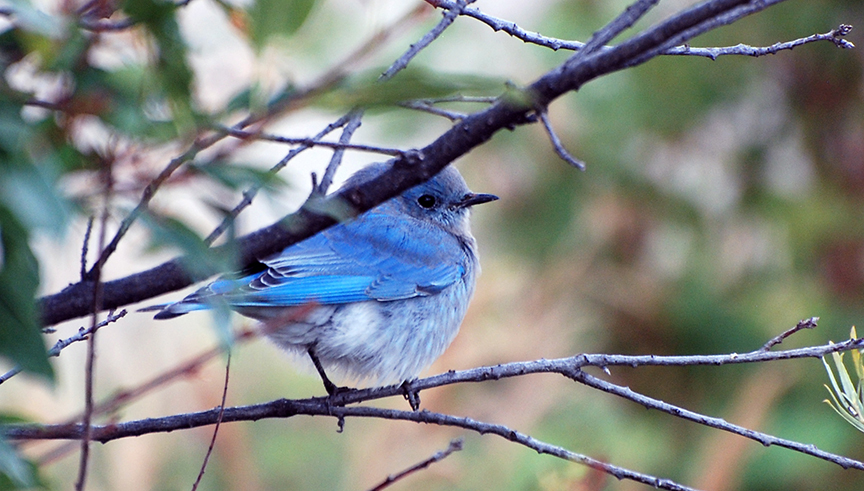 The male Mountain Bluebird is a beauty.

Few local bird species elicit as many superlatives as the male Mountain Bluebird (Sialia currucoides). And with good reason.

“The powder-blue male Mountain Bluebird is among the most beautiful birds of the West,” proclaims Audubon.org. “Adult males are stunning: completely electric turquoise blue with limited white belly,” according to The Cornell Lab of Ornithology’s Nestwatch.org. The male of this species lends “a bit of cerulean sparkle” to open habitats (All About Birds-Cornell Lab).

It’s enough to go to a bird’s head.

For local bird watchers and non-birders alike, these small, plump thrushes are easy to spot and a joy to observe. Watch for a dazzling splash of blue in grasslands and open meadows or in an open area on the edge of a forest. They’re often perched on fence posts, fence wire, low branches and the like. These birds tend to scatter upon a human’s approach, but they don’t go far and quickly resume their activities if the observer holds still. Pastures bordering the Rio Grande Trail are a great spot to watch for Mountain Bluebirds.

Or, invite them to take up residence. Mountain Bluebirds are cavity nesters and will readily inhabit a birdhouse that is properly placed in the right habitat and built according to the specs they require. Online instructions abound. Much of what ornithologists know about Mountain Bluebirds comes from studies of the birds in human-made nesting sites, according to The Cornell Lab.

While the male gets all the attention, the female Mountain Bluebird has no interest in a potential mate’s good looks. She chooses her mate based solely on the quality of the nest site he can provide. The female, a grayish bird with a tint of pale blue on her wings and tail, builds the nest. The male may act as though he’s helping, but he brings no material or he manages to drop it on the way, according to Nestwatch.org. At least he brings food.

Mountain bluebirds eat insects and spiders and can be seen in large numbers as they feed, swooping in to snatch bugs off the ground or hovering to catch winged prey in flight. Juniper berries and other fruit are also part of their diet, particularly in the cold months.

Locally, many of these birds leave the Roaring Fork Valley in late September and October, migrating to the southern United States or Mexico, but some hang out here and in other mountain valleys well into the winter, according to Rebecca Weiss, a naturalist with the Aspen Center for Environmental Science and birding specialist. Mountain bluebirds are routinely tallied during ACES’ Christmas Bird Count and the species is one of the first to return each spring, as early as April, she said.

Subtle beauty – the female of the species.