All in a day’s work for open space rangers 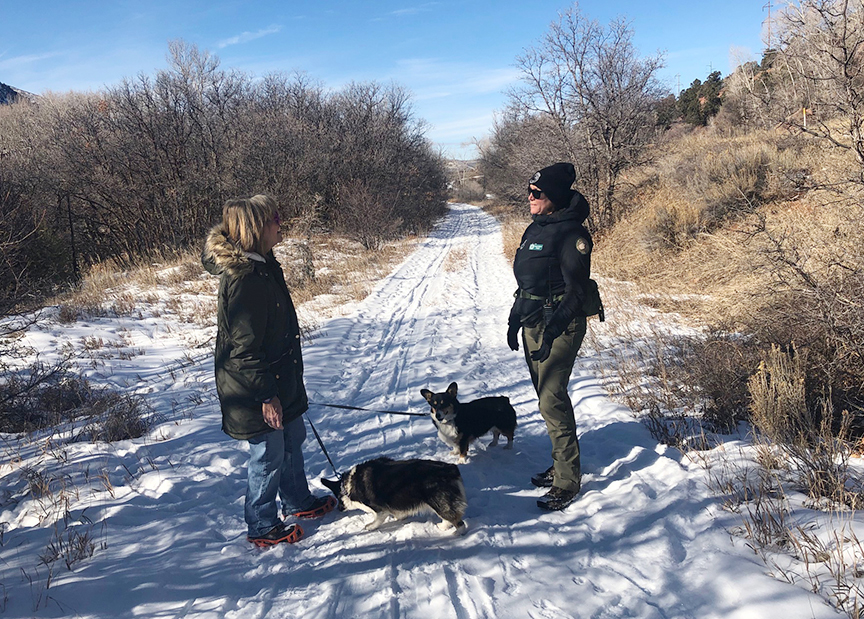 Ranger Megan Ballard (right) chats with a familiar dog walker on the Rio Grande Trail. The dog owner said she has leashed her dogs on the trail ever since a conversation about it with Ballard two years ago.

Behind the ranger badge are men and women who put untold miles on the trails (weight gain is not a hazard of the job), where the expected – say, a dog off leash – gets as much attention as the unexpected – a dog stranded on a rock in a frigid river. The former generally results in a warning and an explanation of the leash law and its importance, the later results in a ranger donning fishing waders, braving the current and carrying the pooch to safety, followed by a discussion about how leashing a dog is for the pet’s protection, too.

Open Space and Trails employs three full-time, year-round rangers and three seasonal rangers who bolster the staff during the busy months of spring, summer and fall. In 2023, a fourth year-round ranger will be added to the staff, allowing for two rangers on duty on most winter days and providing coverage to more of the county.

Winter is something of a respite, with patrols done by truck until the day warms. Focus is concentrated on the trails that remain open during the winter months, though closed areas are checked frequently for signs of violations. Cameras can be placed as needed to keep an eye on problem spots.

In the waning days of 2022, rangers tallied 602 enforcement contacts for the year. The vast majority (about 82 percent) resulted in a chat on the need for a rule and respecting it, a verbal warning or a written warning. Sixty-five encounters resulted in a citation, along with 40 parking tickets issued by the ranger staff.

“Compliance is our number one goal,” said Ranger Supervisor Rick Norman, who oversees the ranger staff. “I’m definitely not lenient, but I don’t like writing tickets if I don’t have to.”

Of the citations issued in 2022, almost half were for offenses involving dogs – either a dog off-leash or a dog where one is not permitted, period (think North Star Nature Preserve).

Dogs don’t just generate the most citations; they spark the most debate.

“There are just as many people calling and approaching us in the field to report dogs off leash as there are people getting mad at us because we’re responding to their dog off leash,” Norman said.

A typical winter day for a ranger isn’t just about dogs, though. Trailhead parking lots are checked for stored vehicles and overnight campers. Trash strewn about a lot gets picked up. At Penny Hot Springs, garbage detail can be time consuming.

Rangers do not pick up after dogs – not the waste, or bagged waste – though they will issue a citation if someone is observed failing to pick up after their pet.

On a slow day on the lower Hunter Creek Trail, however, Ranger Megan Ballard made an exception, picking up every dog poo bag that had been left behind.

“There were like twenty-five of them,” she recalled. “I was appalled.”

Year-round, rangers deal with people experiencing homelessness, responding to campsites on open spaces in the company of a sheriff’s deputy, including one camp on an island in the Crystal River. Campers are referred to human services resources. Citations related to homelessness are rare.

“You should not ticket someone for not being able to afford a place to live,” Norman explained. “We try to be as compassionate as we can be.”

Rangers have been working with Pitkin County Human Services and other agencies in the valley to find solutions to housing instability in the hope that providing resources to those experiencing homelessness helps reduce the number of camps found on public lands.

The outdoor aspect of the job is a big draw for those who seek a career as a ranger, but there’s a lot more to it than riding a bike or cross-country skiing. The required training, and prerequisites for the job, are extensive. Open Space and Trails rangers are trained in emergency response, mental health first aid, traffic incident management, chainsaw operation, basic swift-water rescue, self-defense, conflict de-escalation and more. Annual training is part of the job. Ballard recently completed an interpretation certification focused on giving formal presentations, but applicable to daily interactions with the public.

“A lot of what we do is impromptu interpretation,” she said. “Why is this a nature preserve? What about bears? Surprisingly, we’ll have these ten-, fifteen-minute conservations sometimes.”

On patrol, they come prepared. They have first-aid kits and an AED, or automated external defibrillator, in their trucks. There are tow chains back there, and chainsaws, spare leashes and a host of other gear.

In 2022, rangers responded to 23 accidents/rescues on open space, including bike crashes. When rescuers were summoned to aid a hopelessly lost hiker off the Hunter Creek Trail, seasonal ranger Olivia Niosi responded. She traded shoes with the hiker, giving the young woman sturdy footwear for a scramble through downed trees and boulders to get back on the trail.

While checking on an open space easement in the Castle Creek Valley recently, Ranger Norman came across a vehicle that slid off the road and down an embankment. He went to the aid of two uninjured, but elderly occupants stuck in the vehicle. He couldn’t get them out, but equipped with a radio, he summoned help in an area out of cell range. Norman managed traffic and scene safety, and then assisted first responders in extracting the occupants.

It’s the best part about rangering, he said.

“You can make a plan for the day and the day will make other plans for you,” Norman said. “The day will be nothing like what you thought it was going to be.” 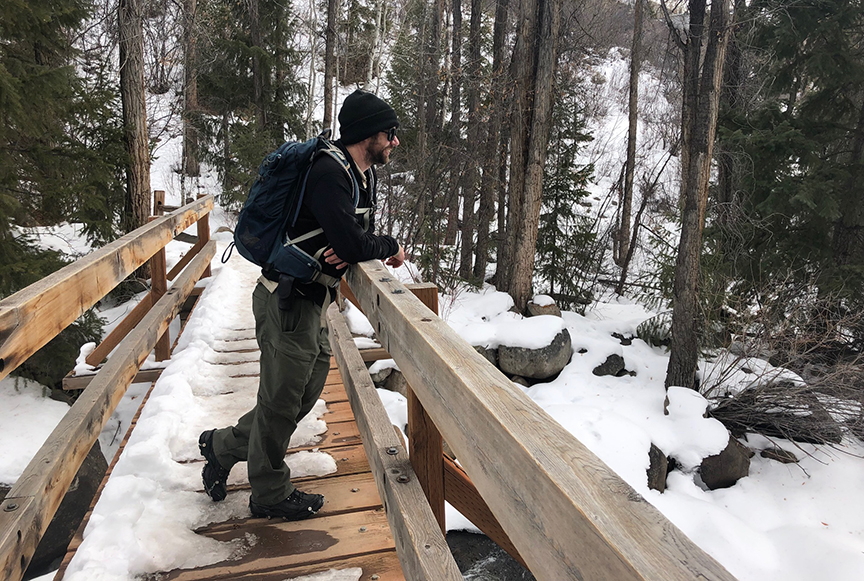