A reminder of the past at Sky Mountain Park 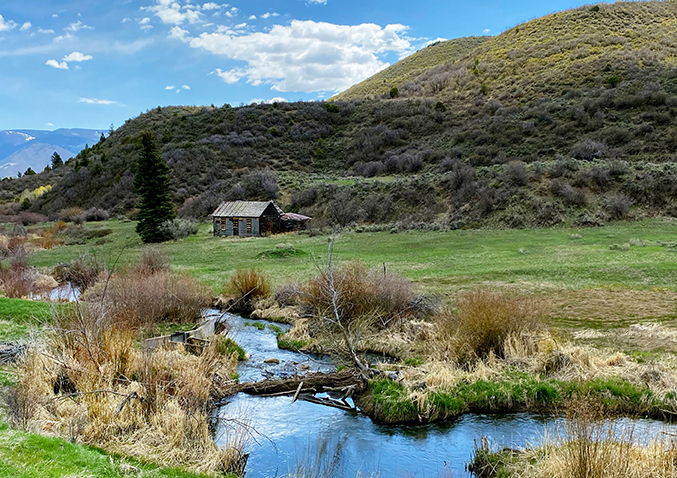 The “Hatch House” in the Brush Creek Valley.

What do a man dragged to an untimely death when his team of horses was spooked by a dead mule, a Wisconsinite who hauled the machinery of a sawmill over Independence Pass by sled in wintertime and a girl who caught a rabbit and sold it for 50 cents in order to buy stamps for her Christmas cards all have in common?

Each were members of pioneering families whose legacies are tied to one of Pitkin County’s most popular open spaces. When Sky Mountain Park reopens for the season on May 16, mountain bikers, hikers and trail runners will undoubtedly enjoy the wildflowers and the vistas. But aside from a few ancient fence posts up top, there is little to remind visitors of the area’s long history as a place steeped in toil, triumph and tragedy, harvest and hope, save one – the boarded-up house next to the giant pine tree in the Brush Creek Valley.

Its story is among many collected in an appendix to the 2021 Sky Mountain Park Management Plan, adopted late last year. To mark the park’s highly anticipated reopening this month, Open Space and Trails offers a bit about the house, as best we were able to uncover it, as a reminder that our playground of today was once the place of a far more challenging existence.

A century ago this year, Florence Roberts married George E. Hatch. The couple apparently ran a rather large livestock operation and acquired much of their land, now incorporated into Sky Mountain Park’s Upper North Mesa parcel (site of the Rim, Seven Star and Equestrian trails), through the Homestead Stock Raising Act in 1939. George was just 42 when he died in 1937 after a brief bout with pneumonia (Aspen Daily Times, Jan. 14, 1937). He is buried at Red Butte Cemetery. The Hatches had two daughters and a son.

The Hatches’ most enduring legacy at Sky Mountain Park, however, is undoubtedly the dilapidated house on the valley floor near the entrance to Snowmass Village. It has long been dubbed the “Hatch House,” though details of the Hatches’ residency there are scant. The modest abode might be more appropriately named the “Adams House” for what were apparently its final inhabitants. A hand-drawn map (source unknown) in the possession of the Aspen Historical Society notes the house in association with the names Kaubel, Hatch and Adams. The late Hildur Hoaglund Anderson, herself a pioneer in the area that is now Snowmass Village, made note of the residence in “Hildur’s Story: Notes from Her Life.”

“There is an old house part way down Brush Creek with a big pine tree in the front yard. That was the home of the Adams [sic], Fred and Mrs. Adams. Mrs. Adams kept the house spotless, even though they were very poor. Fred did some hauling.

“They had two daughters, Edna and Minnie. Minnie still remembers catching a rabbit to sell to the post master in Aspen for 50 cents so she could buy stamps for her Christmas cards. Minnie married my brother Ralph, and Edna married my brother Henry.” (Side note: the cost of a first-class, U.S. postage stamp in 1930 was 2 cents.)

A big pine tree still stands near the crumbling home, though it is not clear whether it’s the same tree Anderson remembered.

In 1996, two large homes on the ridge overlooking Snowmass Village at the Seven Star II parcel were proposed. Before the plan was extinguished by a Pitkin County open space purchase (land that was eventually folded into Sky Mountain Park), developers also proposed restoring the old home on the valley floor to store hay and equipment. At that time, Minnie Adams Hoagland was 83 years old and residing in Fruita. In a newspaper interview, she recalled living in the house with her parents and sister, Edna. They rented it from Charlie Gavin, she said (The Aspen Times, April 20-21, 1996). Gavin was a one-time owner of the Seven Star II land.

“It was just a little old shell of a house. I’m surprised it’s still standing,” Minnie Hoagland said in 1996. She said her family raised a little hay and her father, Fred, cut timber in the surrounding woods for a living. Minnie and Edna shared one bedroom in the tiny house and their parents shared the other (The Aspen Times, April 20-21, 1996). She recalled barns and a small log cabin along Brush Creek in those days, as well.

The house remained vacant after the Adams family moved into Aspen – probably by the early 1930s, according to Hildur Hoaglund Anderson.

“Every time we went by, I’d look down that way. Vandals were knocking out the windows and doing things to the house that made me sad because the Adamses were such wonderful people. Mrs. Adams kept that house in perfect order,” Anderson said. (The Aspen Times, April 20-21, 1996)

More to the story?

Do you have more to add to this story or a historic photograph of the Hatch House? Please share it with Pitkin County Open Space and Trails at web_open_space@pitkincounty.com

Sky Mountain Park Management Plan (2021) – Historical introduction on pages 4-6 details a failed attempt to drill for oil and/or gas along Brush Creek Road, the story behind the name “Cozy Point” and how the purchase of 845 acres made Sky Mountain Park possible.