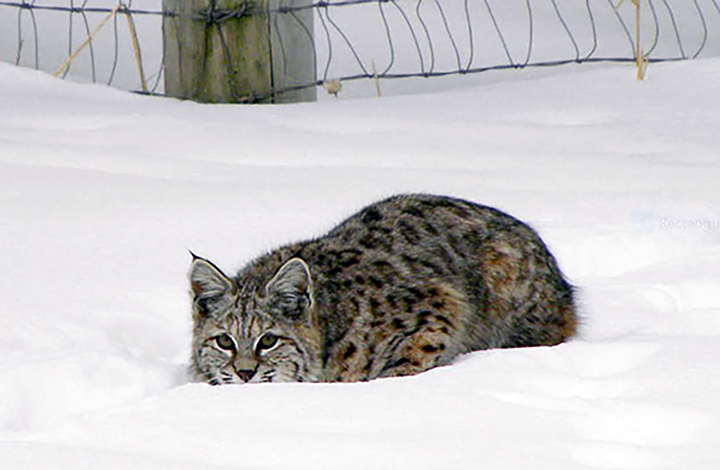 A bobcat crouches in the snow in the midvalley. Cindy Klob photo.

It’s entirely possible that bobcats prowl all of Pitkin County’s Open Space properties, not to mention plenty of other places throughout the Roaring Fork Valley. But the cat that Colorado Parks and Wildlife calls “secretive and seldom seen” is exactly that.

Bobcats call virtually all habitat types in the Roaring Fork Valley home, but sightings are relatively rare, according to Jonathan Lowsky, wildlife ecologist with Colorado Wildlife Science in Basalt. “Many people will live their entire life without seeing one,” he said.

Lowsky knows the cats are present because they trigger his wildlife cameras. Pitkin County Open Space and Trails documents them with its cameras, too. Open spaces that see thousands of visitors seasonally are also home to bobcats. The elusive felines are padding the same trails that draw throngs of mountain bikers and hikers, though bobcats are most active at night.

CPW has no estimate for Colorado’s bobcat population, but they are thought to be thriving, according to Mat Alldredge, a mammals researcher for the agency. Predators in general are doing well, he said, and the bobcat is no slouch in that category.

“My guess is, there are nearly as many bobcats here now as there were when white people first got here,” Lowsky offered.

Stealthy, nocturnal hunters that kill their prey with one bite, these cats can leap 10 feet as they pounce, according to The Nature Conservancy. Rabbits and hares are their main prey, but bobcats are known to take mice, voles, birds and, on the larger side, elk calves, deer fawns and even female, adult deer.

“They are the quintessential cat. They’re incredible hunters,” Lowsky said.

The bobcat (Lynx rufus) is cousin to the lynx (Lynx canadensis) and a casual observer who spots the bobcat’s ear tufts and the facial ruffs on its cheeks may think they’ve seen a lynx. But the bobcat’s tufts and ruffs are shorter and its coat typically buff to brown or reddish brown and spotted, while a lynx pelt is grayish, with less distinct markings on top. Bobcats are slightly smaller than lynx; male bobcats weigh roughly 26 pounds and females are about 15 pounds.

Both bobcats and lynx have the distinctive bobbed tail, but the lynx’s tail is entirely black at the tip. The bobcat tail tip is black on top and white underneath. Bobcats have tell-tale black bars on their forelegs and their paws are proportional to their bodies – about the size of a large housecat. A lynx’s paws can spread to about 3.9 inches and a paw print in the snow may be 5 inches across.

While bobcats are generally considered to be nocturnal hunters, and most wildlife camera sightings recorded by Open Space and Trails occur at night, a bobcat occasionally pops into view during daylight hours. Bobcats are easier to notice when snow covers the ground, given the camouflage provided by their coat when vegetation is present, and the fact that they can remain perfectly still.

“They are incredibly difficult to see,” said the CPW’s Alldredge. “They could be right in front of you and you might never see them.”

The bobcat is one of three wild cats that call Colorado home, along with the mountain lion and lynx. The latter was reintroduced to the state by CPW, starting in 1997. The ring-tailed cat, or miner’s cat, is found in southwestern Colorado, but it is not actually a cat. Rather, it’s a fox-sized member of the raccoon family.

Bobcats in Colorado can be hunted and trapped. The species is valued for its pelt. Annual statewide harvests have ranged from a high of about 2,000 bobcats to just over 1,000 bobcats over the past decade, according to CPW. The harvest has been about 1,200 cats statewide over the last two years.

Hunting and trapping are prohibited on Pitkin County open spaces, and many open spaces are closed from dusk to dawn. Still, if you manage to spot one, count yourself among the lucky few! 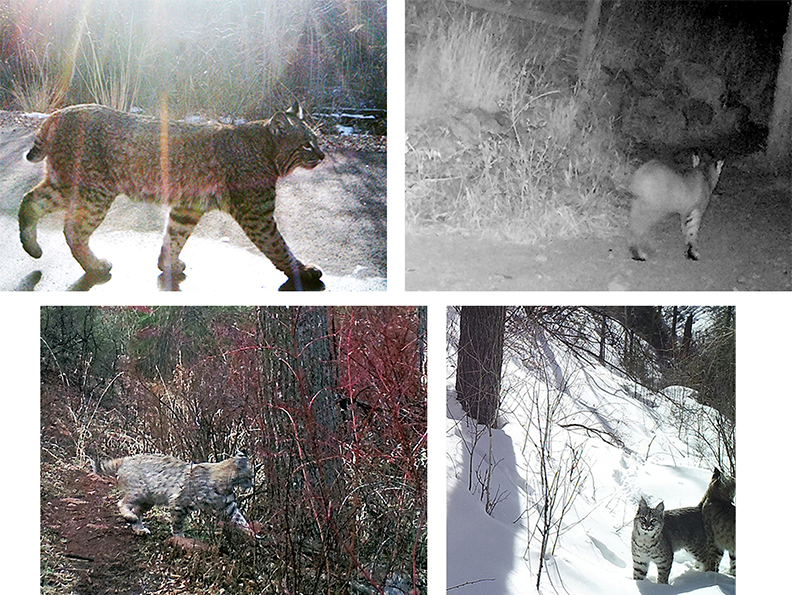 Bobcats photographed on open spaces and, at upper right, on the section of the Rio Grande Trail above Carbondale that is closed in the winter months. (Rio Grande Trail photo courtesy of Jonathan Lowsky)