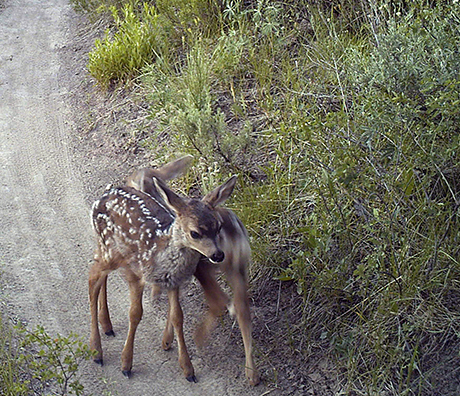 Figuring out what sorts of wildlife make use of a 2,500-acre collection of open space properties is no easy task. Nonetheless, Sky Mountain Park outside of Snowmass Village is carefully monitored for mammals and birds (in addition to vegetation, in separate studies). The goal is simple, though the means are complex: Ensure the park is managed to protect its biodiversity while providing recreational opportunities to its most obvious users – humans.

Monitoring wildlife at Sky Mountain Park involves on-the-ground observers searching in specifically plotted areas for not only actual animals and birds, but also scat, tracks, rubbed trees, bedded vegetation and other indicators of various species. In addition, infrared cameras and scent stations are used to attract and record the comings and goings of nocturnal animals. Owl surveys involve broadcasting recorded calls of owl species and listening for responses by actual owls. The owl calls, incidentally, produced the first record of breeding flammulated owls in the park.

Similarly, raptor calls are broadcast. In 2017, this led to the detection of three species – Cooper’s hawk, golden eagle and red-tailed hawk.

In the 2017 monitoring of bird species, 415 individual birds representing 46 species were detected. That represents the highest estimate of avian species richness yet reported at Sky Mountain Park. Twelve bird species detected at the park are designated by one or more government agencies or conservation organizations as having special status or having been in decline. The species at the park holding the greatest number of these designations is the Virginia’s warbler.

The 2017 Wildlife Monitoring Report reaches a number of conclusions regarding mammals at Sky Mountain Park. It notes one mammal designated as a species of concern, the American marten, is known to occur there. In addition, monitoring confirms the park is heavily used by elk throughout the year, and is used as elk rearing habitat. The park also provides excellent mule deer habitat, including rearing habitat and, likely, fawning habitat.

At least nine mammalian predator species are known to use Sky Mountain Park as part of their home range, though only black bears were recorded in the 2017 surveys. Among the others, Pitkin County Open Space and Trails has documented mountain lions, fox, coyotes and short-tailed weasels.

In short, a full read of the report is an enlightening glimpse into the park’s existing habitat and its potential for the future documentation of additional species. Human users of the park would do well to pause along the trail to listen and look around.